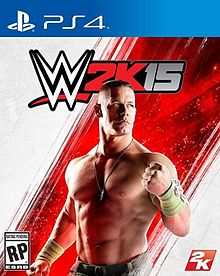 John Cena may be just a guy in ugly tennis shoes and Fruity Pebbles colored gear now, but he was once the leader of “Thuganomics” and wore hip hop attire. He released an album of his own way back when with passable music offered to the hardcore fans, but now it seems he has stepped up his affiliations just in time for the video game WWE 2K15‘s soundtrack. The game will be released later this year, but the soundtrack is available now. You can check it out by following this link.

Cena tweeted the following about the soundtrack and his involvement.

The game’s mechanics and game play engine are being touted as the biggest improvements. The roster is robust and features current and former superstars available to play. The additional downloadable content releases planned after the launch date are said to be significant and surprising. Let’s just hope it’s not Michael Cole in the wrestling attire he wore against Jerry Lawler…