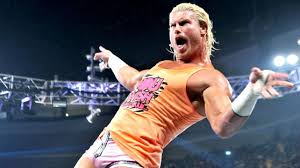 One of the WWE’s most active stars on social media is at it again. Dolph Ziggler is funny, quick witted, and never shy about what he says – and apparently who Tweets.

Ziggler’s buzzworthy Tweet from December of last year was to the wife of President Obama. Michelle O got a message from a concerned Mr. Ziggler, apparently he was worried about the shape of one of her body parts. 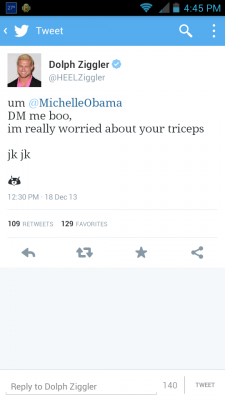 Then he retracts the joke at the end  with ‘jk jk’ making us believe Ziggler may have some kind of friendship with the first lady. It would not be surprising with WWE’s “Be a Star” anti-bullying campaign’s high visibility. You have to admit he has some stones to mention her. It is no secret that the Obama administration has beefed up security and monitoring of what even the most ordinary of citizens comments on. We wonder if Dolph got an email, or the DM he wanted her to send.

Ziggler is now the WWE Intercontinental champion thanks to unwavering support from the fans. This is a big deal because Ziggler made some comments about John Cena’s “three moves of doom” in a public settinh, clearly referring to the very limited skillset of WWE’s current face of the company. They tried and failed to force fans to get behind Randy Orton. Tried again with Orton to dismal PPV numbers, and they continued to try and force Randy down our throats until Daniel Bryan chants drowned out the RAW program’s segments every week leading to Wrestlemania XXX. It is the fans who get behind a superstar and make them a big deal, make WWE notice that they don’t get to choose who is a fan favorite no matter how poorly they book them. Ziggler is one of those guys the fans want as champion and it’s because of his in ring work, and humor.