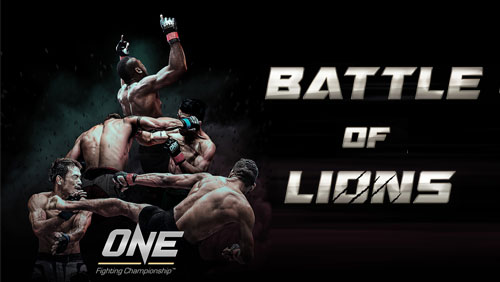 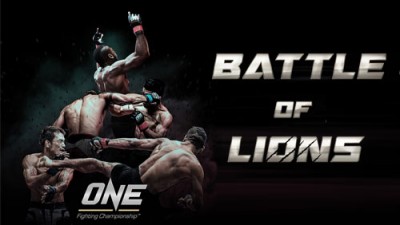 Asia’s largest mixed martial arts organization with a 90% market share, ONE Fighting Championship™ (ONE FC), has added three bouts to ONE FC: BATTLE OF LIONS. The event is set to take place at the Singapore Indoor Stadium on 7 November. Top featherweights Cary Bullos and Major Overall will face off, while Amir Khan and Kirstie Gannaway will represent Singapore against Waqar Umar and Adek Omar respectively. The inaugural ONE FC Middleweight World Champion will be crowned in the main event when Brazilian Jiu-Jitsu world champion Leandro Ataides meets top middleweight star from Kazakhstan, Igor Svirid.

Tickets for ONE FC: BATTLE OF LIONS on 7 November in Singapore are on sale now at Sports Hub Tix (http://www.sportshubtix.com). Ticket categories begin with the full Red Carpet and cageside experience for VIPs at S$378 followed by Arena S$158, Terrace S$58 and Balcony S$38. Prices exclude ticketing fee.

CEO of ONE Fighting Championship™, Victor Cui, stated, “ONE Fighting Championship has acquired a roster of world-class talent from all over the world and fans in Singapore will get to see them in action on 7 November. We will crown a new world champion as two world-class middleweights face off for the honour of becoming the first man to don the ONE FC Middleweight World Championship. Fans watching all over the world are in store for a night of breathtaking mixed martial arts action!”

Major Overall hails from the United States of America. He is a Brazilian Jiu-Jitsu purple belt currently riding a three-fight winning streak. Overall possesses slick submissions and unorthodox striking skills, making him one of the most exciting mixed martial artists currently on the ONE FC roster. He is faced with a difficult challenge in Cary Bullos, who only has one loss in his career thus far.

Cary Bullos is the URCC Visayas Bantamweight Champion. He has finished all of his opponents in his seven victories, making him one of the top mixed martial artists in the world. Bullos has been raring to bring his skills into the ONE FC cage and will finally get the opportunity when he takes on Major Overall.

Amir Khan is a Singaporean who has an undefeated amateur record competing in the United States. He is a Brazilian Jiu Jitsu blue belt under Relson Gracie, and also has competitive wrestling and Muay Thai experience. Khan has more than seven years of competitive combat sports experience under his belt. He made a successful ONE FC debut when he defeated Malaysia’s Jian Kai Chee in Cambodia in September.

Waqar Umar is a Pakistani mixed martial artist well versed in the art of grappling. All three of his victories have been earned through submissions. He is tenacious and is constantly engaging his opponent in brawls. Umar returns to ONE FC action determined to join his Pakistani compatriot Bashir Ahmad with wins for the Asian organization.

Kirstie Gannaway is a Singaporean mixed martial artist making her professional debut. She has more than eight years of boxing training and has competed in Muay Thai. She has spent the past year training with the world champions at Evolve MMA, and will now get the opportunity to showcase her skills in the ONE FC cage.

Adek Omar is a Malaysian mixed martial artist who will become the second Malaysian female mixed martial artist in ONE FC history. Omar comes from a family of martial artists, and picked up the art of Muay Thai at a very young age. She has excelled in national competition in Malaysia and ONE FC: BATTLE OF LIONS will see her make her debut against another highly touted prospect.

Fans around Asia can catch all the action live on FOX Sports 3. Check your local listings. Also, fans from around the world can witness the action online via live streaming at http://www.onefc.com/livestream. The event will be available for purchase at just US$9.99.

About One Fighting Championship