My journey from McDojo to MMA, How to spot a McDojo

What is a McDojo?

There are lots of definitions out there and a whole lot of debunked McDojo instructors thanks to sites like Bullshido.net and the MMA Underground forums. Here’s the catch, sometimes you don’t know you are in a McDojo. I didn’t.

For years I was okay with what I was doing. I even placed 1st at world championships in sparring, and 2nd in forms, and pretty much took 1st at every tournament I went to after I received my 2nd degree black belt. I enjoyed it and I loved what it did for my confidence. What I really enjoyed was the friendships and the fun from being in such a large organization. It wasn’t until years later I started to question what the hell I was really doing and if I was a true martial artist who could defend himself on the streets. You probably know the answer to that already.

I had 100 students at one point and none of the kids had more bad grades, or more than one C in class. I took 5 “F students” and turned them in to A’s. McDojos are not all bad and kids benefit greatly from the positive reinforcements, monthly lessons, structure, and discipline. That was very rewarding and it really made me feel like I was changing lives, and for that I am grateful. One of the greatest speakers to ever teach a martial class was Eric Moberly, an ATA (American Taekwondo Association) instructor, my instructor.

Eric was nationally respected not only for his incredible athletic abilities, but also for his ability to teach. I have issues with alot of things that happened over the years and while my view of him personally may have diminished I will always give him those two things. Even he knew TKD could not work on the streets so he learned a competent level of jiu jitsu and became certified in Krav Maga, the Israeli fighting system. His school became credible as did his protege Ryan Ginger’s because they recognized that times were changing and he supplemented the traditional martial arts with practical ones. They both teach legitimate forms of self defense and their schools are now respected more for it.

Truthfully,  Eric was a cog in a larger McDojo system that churned out “masters” who were sometimes technically terrible or physically unable to perform the moves adequately. It became a “do the best you can” and not “meet credible expectations”. When that happened figures like Bill Clark, a millionaire from the McDojo system, swooped in with ideas of how to make more money. The money grew and grew as did the feeling of cult like membership.

Your black belt promotion consideration consisted of these four things:

1. Time at the belt you were at. This started at black belt because before that it was every two months to test for a new color belt.

2. Can you break your boards with multiple attempts.

3. Can you remember your forms, sometimes multiple attempts allowed.

4. Can you at least throw punches and kicks in some semblance of sparring.

I became increasingly embarrassed because I started writing for Bruce Buffer’s MaXfighting website and interviewing scores of UFC, BoDog, and Pride fighters. I broke the news that Chuck was waiting on Wanderlei to accept and I also broke the news when Forrest Griffin got cut from Xyience. I still owe Rashad for letting that slip to my former editor. I was writing like crazy doing extra things like writing Tito Ortiz’s book proposal. It got shopped around and ultimately declined because of Tito’s waning popularity. Missed opportunities, right. The point I am making is this my eyes opened and my life changed when I met Jorge Gurgel and Rich Franklin.

Rich was going to face Ken Shamrock at the 1st Ultimate Fighter finale and I interviewed him. Jorge offered me training at his MMA school and I accepted because it was an hour and a half from my house, and it was free as a gift. I came for my first class and left feeling like WTF just happened. I was nowhere near being able to defend myself. 4 years later and I was hanging in there with and sometimes getting the better of pro fighters on the ground and standing up. Of course they were ultimately better than me, but I could hang in there. That’s when I realized I was delusional and how much of a lie I felt like I was telling saying TKD was self defense. 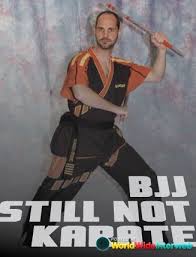 I didn’t have to make the decision to leave TKD because my body did. I was falling to the floor randomly just by standing and was told by a doctor quit because “if you get kicked solid in the back you could be paralyzed”. Years later thanks to Dr. Patrick Sparks I found out how bad the damage really was and how lucky I was to not get a good shot to the back. It was the hardest thing I had to do when I left my instructor and the TKD life I had become attached to, but it had to be done. 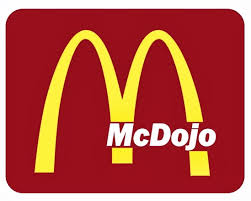 I snagged this list from McDojo FAQ. These are warning signs, red flags if you will that a martial arts school is a McDojo.

In closing there is nothing wrong with taking from one of these schools. Mr. Ginger and Mr. Moberly help produce a junior olympic TKD gold medalist as an example. Your kids will absolutely enjoy the promotions, curriculum, and activities. If you are an adult looking to learn something to save you from danger on the streets a McDojo is not the place for you. Ask yourself how much you are willing to spend, what you want to get out of the classes, and do you care if other organizations make fun of you because prepare yourself, it will happen to you eventually. If your expectations meet what the school you inquire about has to offer then it is a match. Good luck!

“Sparring” in a world championship match

“Self Defense” based on an insect