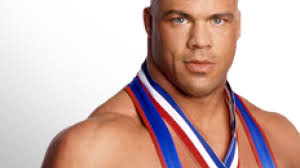 Kurt Angle is a shoe in for the WWE Hall of Fame. The main question is really when and will the stars align at that time for it to happen. Kurt has teased a jump from TNA Wrestling to another company, but he isn’t saying a word. He did speak with AlternativeNation.net about a number of hot topic items.

The future of TNA Wrestling on TV

“Well at the TV’s we just did, Dixie Carter and ‘Big’ John Gaburick sat the talent down and eased their minds a little bit, because I think a lot of the talent were a little bit confused and nervous regarding what was going on. I had a private sit down with Dixie, she reassured me of what was going on, and what her plans were. It was a good meeting, it was a very positive meeting. She just knows that the next deal that they sign really has to help benefit TNA, in every regard.”

“The only person that I really spoke my piece with, that I had a lot to do with in the past, and the problems I had and the way I left the company, I was able to speak my piece with Vince, and I’m happy with that. As long as Vince and I don’t have any issues, I’m okay with that. What I found out is that Triple H is pretty much running the show now. I didn’t know that, I really believed that Vince would always run the show until the day he died, but now they’re in a position as a publicly traded company where you’re not only answering to Vince and Triple H, you’re also answering to the shareholders.”

Finally, the potential induction in to the WWE Hall of Fame

“Yeah, like I said, I’m not going to say where I’m heading next, but the Hall of Fame would definitely be an option; I’m not going to count that out. It’s a big honor, it would be important to me. Is it the most important thing? No. Obviously being inducted into the National Wrestling Hall of Fame and International Wrestling Hall of Fame for Olympic style wrestling is the most important thing to me. But it is still important to me, because I’ve definitely made a legacy for myself in pro wrestling, and I take a lot of pride in it, I love the business. The Hall of Fame would be nice. Would it be the end of the world if I wasn’t inducted? No, but it would be an honor.”