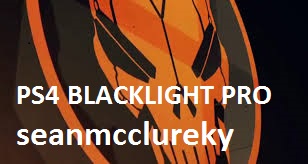 Welcome to another column from Blacklight Retribution monster seanmcclureky. If you play the game, you’ve seen the name. I will be broadcasting on Twitch more often soon and the channel name is my player name.

First off let me say that it was a tough weekend for me. I almost died last Tuesday by accidentally stabbing myself in the hand opening a toy for my kids. I cut the artery in such a way that it was hard to stop the bleeding, and well – I ran out of blood almost. I had stitches and limited range of motion in my hand so handling a controller was interesting to say the least. A couple of times I dropped the controller with my enemy in sight and got killed promptly. Frustrating to say the least.

If you want to be successful at this game pay attention and read this next paragraph.

If you choose to make me your rival agent you will get smashed if you’re not spot on. In every game you will subconsciously invent some sort of rivalry between you and a random character. When you’re me and mow people down that happens a lot trust me. If you are stupid and rush in to revenge kill and die again move on.

You kill your team’s score by focusing on one guy. Move on. You will be blinded with frustration and subsequently blindsided by other players picking you off from behind. I have been guilty of this often if it’s a long time rival of mine like Dirkroopa (not a threat anymore), unmutedahole (pwn him regularly), and in the beginning Bubbiewendy. Bubbiewendy and Didyoufall have been two guys with whom we carried noob teams to victory often. If I am on the opposite team I choose to leave the game rather than kill them. The point is, one taunt from a guy shooting you from behind can ruin your experience if you let it and cost you the game if you go 8-15 just to get the kill.

NOOBS OF THE WEEK!

This week is full of noobs! Players that shoot you from a crowd, behind, or via long range sniping once and taunt you. Hey that’s fair right? Then they spend the rest of the time running from you and when it becomes obvious they cannot outplay you they quit the game.

Sometimes they are on a large and deep map like Heavy Metal or Piledriver and kill you once, taunt you and then spend the rest of the game ducking and dodging you. If a map like Decay, or Helodeck is next they will leave the game immediately because you cannot hide in the close quarters. You will most assuredly come face to face with the person you repeatedly shot in one of the ways listed above and die. They will most likely sit on your face 100 times and taunt you back. Then you will spend the rest of your noob time trying to revenge kill them because you did not read the NOOB TIP above.

1. Anyone with this naming convention, “Xx_Name_Here_xX”.

There are so many of these guys and at first I thought, wow these guys must be bad ass. When you are a noob without gear everyone is bad ass. Now I spend my time collecting their kill data in kill confirmed mode, or just embarrassing them in to not following NOOB TIPs.

If I see your name has those two letters in front or back – I kill you.

I had 5 members get completely obliterated and finally kill me 4 maps later. They taunted and left the game….

This poor guy. He can kill new players, but when it comes to me it’s just sad. He tries, he really does. His little legs go as fast as they can trying to race back to where I was only to die again. This weekend in 5 games he killed me once. I was in a gunman hardsuit and he was in a crowd of 5 people before he got the final shot out of all of their bullets that killed me. He sat on my face – then got owned 5 times straight up.

What that looks like is hilarious. If you play the game you know what an HRV is. It is a brief map wide glimpse at where friend and foe is on the map. Kind of looks like infrared that can see through walls. You will see them racing their little bodies trying to avoid your teammates and get back to you, only to die on the way or when you kill them again.

This guy is your typical troll. Decent skill, but horrible one on one. We played the outpost map and he would rush in a group of his teammates and steal kills from behind, never taking the lead. He would taunt, and then he met me. He was team warlord, but by the time he tried to stay away from me and KING_FEANOR he was in 4th place and cost his team the match. He’s terrible straight up with someone and he immediately left the game when Decay showed as the next map. I have wiped the maps with him consistently, but this week he was even more of a cowardly noob.

These three killed me once or twice and had been taunting my team often if they scored a kill. Once I was done protecting an area, I enjoyed the other half of the game watching them respawn via my submachine gun. Noobs!

See you next time. Enjoy the respawns.