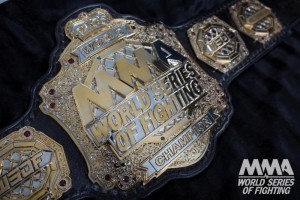 In a radical move that could forever change the earning potential of Mixed Martial Arts (MMA) fighters, World Series of Fighting (www.wsof.com) has announced that it will enter the pay-per-view business in the second half of 2015 with an unprecedented revenue sharing model that will pay 50 percent of all net revenue earned from live pay-per-view events it produces, to the fighters featured on the telecasts.“This is a proud day for the sport of mixed martial arts and our organization and one that we hope will create a better opportunity for the fighters who put everything on the line every time they step inside the cage,” said World Series of Fighting President, six-time world champion and two-time Hall of Famer Ray Sefo. “Until now,” continued Sefo, “one of the main things holding this sport back from becoming even bigger than it is today has been fighter compensation and the inability of the sport’s top athletes to earn on par with top-level professional  athletes in other sports. “If fighters can’t earn a fair share of the money at the top,” said Sefo, “the fighters lose hope or become disenchanted with the sport, which impacts their commitment to training and preparing properly for title fights.  That is about to change, thanks to this major step we are taking now fighters will train harder than ever to become a champion giving the fans some epic championship bouts to enjoy. We want to thank NBC Sports and NBC for giving us such an amazing stage to grow World Series of Fighting since its debut.Since it launched its live event series on Nov. 3, 2012 with a stellar six-bout fight card on NBC Sports Network that reaches over 80 million homes, World Series of Fighting has effectively been building its brand and on July 5, the promotion made its debut on broadcast television before a live NBC audience of nearly 1 million viewers. World Series of Fighting has successfully expanded its footprint to over 80 countries and counting with its premier fight programming as part of a multi-year agreement with IMG the world’s leader in sports content distribution.World Series of Fighting returns to NBC Sports Network on Saturday, Oct. 11, with a four-fight telecast headlined by a welterweight (170 pounds) showdown between superstar Jake Shields (29-7-1) of San Francisco, Calif. and Canada’s Champion Ryan Ford (22-4) of Edmonton, Alberta Canada.  The promotion will also crown its first heavyweight champion in history in the co-main event between fast-paced finisher Smealinho Rama (8-1) of Calgary, Alberta Canada and KO artist Derek Mehman (18-5) of Cedar Rapids, Iowa.Additional details about World Series of Fighting’s 2015 pay-per-view launch will be announced soon.