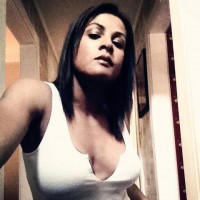 Fallon Fox is back in the news. The first transgender fighter put a beating on Invicta FC veteran Tamikka Brents last weekend in a fight that saw Brents leave pretty banged up. Reports indicate that Brents had a broken orbital bone and concussion following the fight. That sparked the debate once again on whether or not Fox should be able to fight females and what advantages she has as a transgender athlete.

Ronda Rousey was asked about her take on Fox by TMZ and she said that transgender athletes should be judged on a case by case basis but Fallon Fox had an unfair advantage due to the fact she went through puberty as a male. Despite that advantage, Ronda still believes she could knock her out.

Fox responded to Rousey on Facebook with this reply. 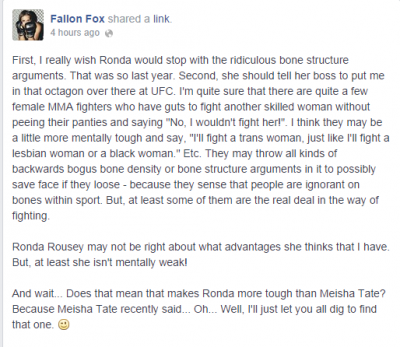 Fox seemed to show some respect to the champ but let’s be real, the UFC isn’t touching this gal with a 10 foot pole, at least not right now. What do you think about Fox and her situation? [ads1]