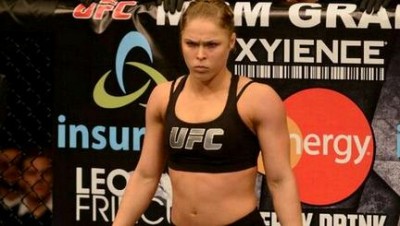 In case you missed the Ray Rice knocking his fiancee out scandal you can relive it by clicking here for the video, and here for his wife’s idiotic announcement that she will stay with him.

“Extra’s” Charissa Thompson caught up with UFC’s Women’s Bantamweight Champion, Ronda Rousey, at the premiere party for the FOX Sports 1 show “The Ultimate Fighter,” where Rousey commented on the Ray Rice video.

PMN’s Kelvin Hunt did a great job describing the event:

He hit her with a punch and she then hit her head on the railing on the wall, knocking her out for close to FOUR minutes.  Also, notice how nonchalantly he stands over her while she’s out, barely trying to move her or see if she was OK.

If you read that and don’t get angry as a human being then you might be an alien hiding among us. Even President Obama called Ray Rice out on his actions saying he wasn’t a “Real Man”.

Here’s what Ronda had to say after watching the disturbing event.

“What the hell am I watching? Is this Sportscenter…”

“You need to respect yourself and see what you are worth … really know what you are worth. Unfortunately, I think a lot of women undersell themselves and don’t know how much they really deserve. I know for a fact that [Palmer] deserves more than she believes.”

…For women, I think, you just need to respect yourself and see what your worth, and really know what you’re worth. And, unfortunately, I think a lot of women undersell themselves and they don’t know how much they really deserve. And I know for a fact that that woman deserves more than what she believes.”