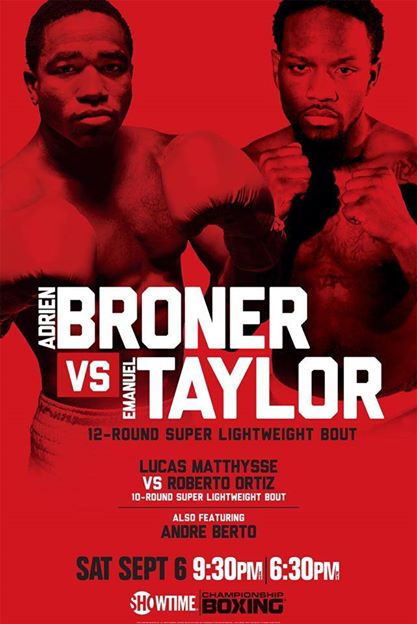 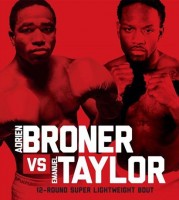 We are here at the storied US Bank Arena in Cincinnati for a night of championship boxing. Yep, boxing.There are 10 big matches tonight and the main event features Cincy’s own Adrien Broner. Broner meets Emmanuel Taylor for the WBA International Super Lightweight title. The main card is supported by a WBC Super Lightweight title fight between Lucas Matthysse and Roberto Oritiz. The opening bout on Showtime tonight will be a welterweight contest between Andre Berto and Steve Upsher.

Stay close for updates and round by round coverage of the main card tonight.

Round 1 – Berto comes out swinging. Berto eyeing the body shot early. Berto’s left hand is lightening fast. Liver shot from Berto. Andre is landing at will. Upsher comes back with a jab. Upsher to the body. Berto jabbing with the left. Upsher with some left hands of his own. Upsher goes to the body. Overhand right from Berto. He crackes another big right hand that was partially blocked by Upsher. Upsher throwing but Berto is covered up. Good combo from Berto. Upsher lands a a right hand as the bell rings. PMN scores it 10-9 for Berto.

Round 2 – Upsher starts the second round with a body shot. They tie up briefly. Double tap with the left from Berto. Berto playing defense and slipping out of the way of Upsher’s attack. Upsher to the body of Berto. Berto comes back strong landing as Upsher is in the corner. Left hand lands from Berto and Upsher smiles. Rapid fire exchange as the round ends. Close one but Berto takes it, 20-18 after two.

Round 3 – Berto looks confident and fires an overhand right that is off the mark. Berto goes back to the body of Upsher. Upsher looks like he is standing in concrete, no movement at all. Left hand from Berto lands. Upsher pushing forward but is stopped. Berto rocks Upsher with a right. Berto lands three big shots that has the crowd excited. Upsher can’t get any offense off at all. Berto cruises, 30-27 after 3.

Round 5 – Left hand comes out from Upsher. Berto counters with a big right. Upsher jabs his way from against the ropes. Berto snapping off that left hand. Berto goes to the body. Berto is lighting Upsher up. Upsher against the ropes taking punishment. Upsher throws a right hand to show he’s still in it. Berto’s left hand is destroying Upsher. The right eye of Upsher starting to close. 49-46 after five, Berto on top.

Round 6 – Upsher starts out swinging but Berto shrugs it off. Berto gets Upsher against the ropes and mixes it up from the body to the head. Big right hand from Berto. Overhand right connects from Berto. Upsher trying to fight his way from against the ropes. Berto connects and Upsher answers with a flurry of punches. 59-55 for Berto after 6.

Round 7 – Touch gloves and Berto snaps a left hand. Overhand right by Berto. Berto sticks the jab. Berto knocks Upsher into the ropes. Upsher missing a combination. Berto to the body. Straight left lands from Berto. Another left from Berto. Right hand snapes Upsher’s head back and the sweat flies. Upsher gets Berto agains tthe ropes  but not for long. 69-64 after 7.

Round 8 – Upsher has some pep in his step. Berto sitting back looking for an opening. Berto lands his left once again. He’s battered the right eye of Upsher. Berto moves forward landing another left. Upsher lands to the body. Berto comes back with a strong combination. Berto to the body. Berto lands a couple more shots for good measure as the round ends. 79-73 for Berto.

Round 10 -Berto looks fresh going into the final stanza. He fires off a good combo pushing Upsher back. Upsher looks beaten up but is hanging in there. Upsher lands a good combo. Berto getting vocal as he goes to the body. Another 10-9 round as we go to the judges.


Adrien Broner vs. Emmauel Taylor – WBA International Super Lightweight Title
Round 1 – Broner comes out swinging but Taylor answers. Taylor to the body. Broner tries to tee off on the head of Taylor but nothing doing. Taylor to the body once again. Short uppercut by Broner. Broner lands a lopping left The entire crowd is watching a pair of fights in the crowd. Broner misses a big right. Taylor is defending well with solid head movement. Taylor starts to connect as the bell sounds. Close round. Taylor 10-9.

Round 2 – Broner goes to the body. Taylor puts Broner against the ropes and starts to tee off. Broner pushes him away. Uppercut off the mark by Taylor. Right hand from Broner. Broner slides in and lands a shot to the bread basket. Broner against the ropes again and pays for it. More body shots from Taylor. Short uppercut from Broner. Left hand from Taylor connects and snaps Broner’s head back. Broner lands to the body. Broner connects with a quick combo. Left hand from Broner. The flurry towards the end pushes it his way. Tied up 19-19 after two.

Round 3 -Broner lands early and Taylor counters. Taylor is keeping a fast pace putting Broner’s defense to the test. Broner is able to block a good number of shots.Broner starts to connect with some jabs. Big left hand off the mark. Body shot from Broner. Good round for Broner, 29-28 for the hometown kid after three.

Round 4 – Taylor throws some left hands. Broner lands his left. Broner ducks under a right hand. Combo from Broner lands and the crowd gets behind it. Right hand from Broner. Left to the body from Broner and then a right hand. Overhand right from Broner. Follows it up with a good combo. Taylor punching into Broner’s gloves. Left hand connects from Taylor. Broner way more active and accurate this round. 39-37 Broner.

Round 5 –  A good exchange in Broner’s corner. Broner against the ropes eating some punches. Taylor is having a hard time connecting, Broner covered up. Left hand from Broner. Left from Taylor followed up by a big right hand. Taylor misses with a big right. Body shot from Broner. Right hand knocks the sweat of Broner’s face from Taylor. Broner back against the ropes. Broner strings together some good shots. Body shot by Broner. Close round, going with Taylor. 48-46 after five.

Round 6 –  Taylor comes out jabbing. Broner finds himself against the ropes again. Taylor lands some good shots and Broner circles out but is right back against the ropes. Body shot from Taylor. Left hand from Broner. Broner misses and overhand right but a left hand connects. Broner against the ropes and is getting worked over. Another round for Taylor ties it up. 57-57.

Round 7 -Taylor connects with an overhand right. Broner against the ropes briefly but gets away. Taylor lands a left hand. Broner to the body and steps back. Taylor misses a right hand. Right hand off the mark from Adrien. Taylor ducks under. Broner edges this one out. 68-67 Broner after 7.

Round 8 – Right hand starts the round from Broner. Crowd is chanting AB. Taylor throws a couple left hands. Uppercut from Broner off the mark. Broner hits a good combo. Broner back against the rope and Taylor works the body. Broner with a left hand to get away from the ropes. Broner misses with the right. A good exchange in the middle of the ring. Broner with a big right to end the round. Taylor steals this one, 77-77.

Round 9 – Taylor to the body. Taylor still having trouble getting punches through. Broner defending nicely. Broner with a right hand. Taylor back to the body. Strong combo by Taylor. Quick jab from Broner. Broner shows a spark,lands a combo. Body shot from Taylor. Broner returns the favor. Taylor pulls ahead.

Round 10 – Broner starting to up his volume of punches. Finds himself against the ropes but quickly retreats. Taylor to the body. Broner content with staying on the outside. Taylor ducks under a big right hand. Broner dominates the closing 45 seconds. Broner gets that round easy.

Round 11  – Broner starts this round much better. Taylor is firing back. Good exchange but Broner is landing a bit crisper. Left hand lands from Broner. Broner circles out. Taylor gets Broner against the ropes and lands some shots before the round ends. Broner takes this one.