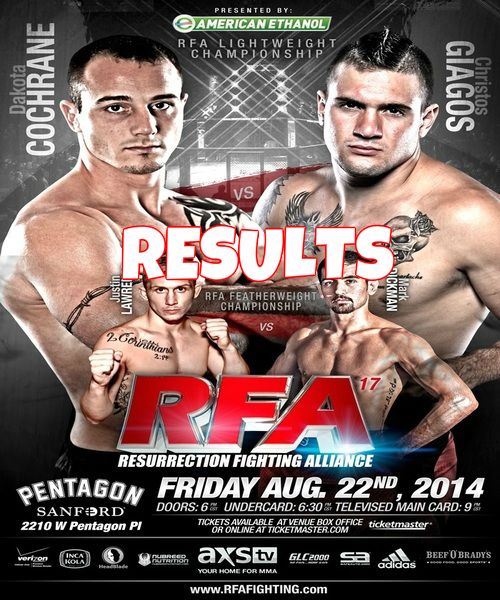 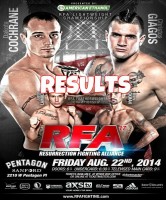 Resurrection Fighting Alliance makes history tonight as they put the first sanctioned event on in the state of South Dakota. RFA 17 goes down tonight at the Sanford Pentagon in Sioux Falls and will feature two title fights . The co-main event features UFC veteran Justin Lawrence against Mark Dickman for the featherweight title. Dakota Cochrane meets Christos Giagos for the first RFA lightweight title.

The feature bout pits undefeated Luke Sanders against Darrick Minner with the winner getting a shot at the title. The event is laced with great local talent.

Stay close to ProMMANow.com for all the results.

Round 1 – Galloway comes out jabbing. Overhand right from Frazatto. Frazatto swings and misses. Frazatto gets the takedown. Frazatto working for the top. Galloway trying to escape but gets caught by a leg triangle and submits.

Round 1 – Winters come out with a straight left. Winters goes for the takedown. Fighters trade shots. Larson dips under a kick and goes in for the takedown. Larson gets the better position and goes in for a choke. It goes to the ground and Larson drops shots from the top. Winters in trouble but he gets out. Winters gets a guillotine but Larson is fighting it off. Larson slips out as the round ends. Larson controls much of the round. PMN Scores it 10-9 Larson.

Round 2- Winters strikes first. Winters trying to put something together but is off target. Winters dropped to his back but is in a guillotine. He’s out quickly. Larson sneaks in some body shots. Larson gets full mount. Winters rolls and Larson stays on his back. Winters gets out and up! Larson trying a single leg. Winters back down. Both are working for submissions. Keylock in then out from Larson. Maybe an armbar? Weird spot really. Both guys trying to get a submission. Kneebar from Winters. He pounds the leg as it is in the knee lock. WOW. Larson survives and wins the round in our book.

Round 3 –  Can Larson’s leg hold up. We are back on the ground early with Larson working for a submission. Winters inside the guard of Larson. Larson trying for an armbar. Armbar attempt now from Winters. Larson looking cool under pressure. Armbar looking very painful and tight. Locked in for awhile. Larson trying to work out of it as the crowd gets behind it. HE”S OUT! Larson is out but gets some shots from the bottom. Larson on top but not much action. Winters reverses out and is on top. He starts dropping some elbows. Only 20 seconds left. Larson drives to his knees. This round is over. Winters wins it but we have it 29-28 Larson.

Round 1 -Appel going for leg kicks to start. He presses France to the cage. Foot stomp from Appel! Clinched against the cage. France gets position and gets a takedown. France is dangerous on the ground. Appel trying to be active. France maybe setting up an arm triangle. Appel gets up and goes right back to the clinch. Knee from France at close range. France reverses and puts Appel against the cage. To the ground and France has top position working towards side control. France gets the arm and it’s all over!

Round 1 – Sanders gets the first shot, Minner swinging hard. Minner going for a takedown but Sanders gets away. Sanders puts Minner against the cage and hits a good knee. Inside leg kick from Minner. Luke with another knee. Minner snatches it and tries a takedown but not happening. Back to the clinch and Sanders lands an elbow. Sanders comes in fast pushing Minner back but Minner gets the leg again. Stuffed by Sanders. He lands some shots as Minner holds on. The fight hits the mat with Sanders on top dropping some shots. Fighters up as Luke lands a right hand. Minner swings and misses. Sanders starts landing at will before he wraps up Minner and gets him to the ground. Elbows coming down from Sanders. Sanders still on top but Minner looking to escape. More elbows from Sanders. Minner has no defense. Sanders not letting up as Minners is now against the cage. Luke gets on top as the round ends. Easy 10-9 if not 10-8 for Sanders.

Round 2 – Minner comes out aggressive but gets wrapped up by Sanders. Back in the clinch with knees coming from Sanders. Sanders back to the middle of the cage. Minner having a hard time finding his shots. Sanders with some standing elbows. Minner down and Sanders starts to work with what, you guessed it, elbows. Minner getting dominated with nowhere to go. This could be over but ref is letting it go. Sanders gets the back of Minner and still dropping shots.  Ref steps in and calls it off!

Round 1 – Touch of gloves and it’s on. Low kick of the mark from Lawrence. Lawrence rushes in with a jab. Dickman returns the favor. Dickman gets the body kick. Lawrence throws but can’t connect. Low kick from Lawrence checked. Dickman ducks under the assault of Lawrence. Dickman lands a jab. Boo birds coming in. Dickman shoots in working a takedown. He has Lawrence’s back looking to get him to the mat. Lawrence fighting it off. Knee from Dickman. Lawrence has wrist control, Dickman can’t get him down. Dickman drops for a double but can’t get it. Now a single leg attempt. Lawrence starts to throw some shots. Dickman bleeding out of his eye. Dickman gets Lawrence down but he’s right back up. PMN sees it 10-9 for Dickman.

Round 2 – Lawrence with a front kick that doesn’t land. They trade jabs. Spinning heel kick off the mark from Dickman. Lawrence lands some shots after Dickman missed a takedown. Lawrence mixing it up. Groun shot from Lawrence stops the action. Jab from Dickman to start the action off after a break. Dickman trying for a takedown but it isn’t happening. Ref separates them. Lawrence puts together a nice combo. Round closes out. Lawrence event it up. 19-19 after 2.

Round 4 – Lawrence comes out strong. Dickman lands a good shot. Overhand right from Lawrence but off the mark. Head kick from Lawrence lands flush. Lawrence lands another kick and Dickman goes for a single leg. Lawrence down briefly but right back up. Dickman’s nose pouring blood. Ref breaks them up. Left hand from Dickman. Fighters trade punches and reset. Dickman landing jabs but no power behind them. Dickman circles. Lawrence shoots in but can’t get Dickman down. Lawrence evens it back up .

Round 5 – Dickman looks the fresher fighter. He works for a takedown but gets a couple shots to the head. After stalling against the cage the ref breaks them again. Lawrence pops in and pops out with a nice little love tap. Jab from Dickman. Dickman back to working for a takedown. Half a round to go. Crowd not happy. Ref steps in and breaks them up AGAIN. This fight is dragging on. Lawrence goes in for a kick, Dickman slides back. Single leg attempt from Dickman. Elbow from Dickman then a spinning back fist. One minute to go and it’s gonna be a hard round to call. Lawrence with a front kick. Spinning back kick from Dickman, He gets dropped but is right back up. Spinning kick from Dickman. Dickman may have this 48-47.

Round 1- Touch gloves and here we go. Double leg attempt from Giagos. Giagos gets Cochrane down and gets his back. Cochrane up and gets a single leg takedown. Giagos trying to get up but Cochrane keeping him down. They are back on the feet and Giagos lands a couple knees. The Spartan lands a body shot. Giagos dropping maybe looking for a single. Cochrane on his back. Giagos lands some shots. Cochrane powers out and is side control. Cochrane working out of the guard of Giagos. Cochrane trying to get some space, drops and elbow. Giagos trying to get up but is kept down. Half a round left and Giagos maybe looking for a triangle? Not happening and Cochrane lands a couple more shots. Tough to call but great round. PMN sees is 10-9 Cochrane.

Round 2- Action starts fast in the second stanza. Cochrane down but gets up. Good body shot from Giagos. Cochrane gets a kick to land and shoots but Giagos sprawls out. Knees to the body from Giagos. On the feet and Giagos misses an overhand right. Kick to the bread basket from Giagos. Big knee from Giagos and BAM. Cochrane is out! Knockout for the new champ!