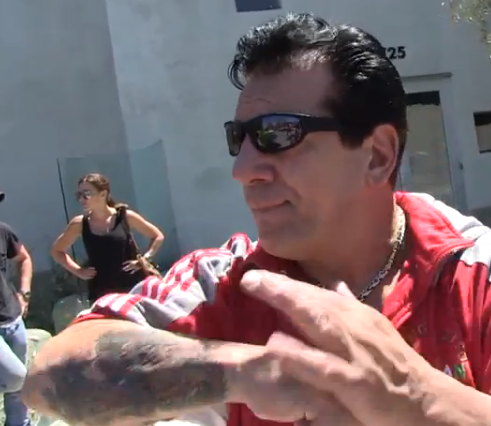 Chuck Zito, former member of the Hells Angels, Sons of Anarchy star and longtime UFC supporter, was asked about his thoughts on the War Machine-Christy Mack situation. His response was more than a little disturbing.

“…it’s personal stuff. I’m sure there’s things that go behind closed doors every day, you just don’t hear about it. He just over-reacted I guess, because I guess if my girl was bangin’ somebody, I’d be doing the same thing.”

And in case you don’t know what “same thing” Zito means, he punches his fist.

Since that video was released, Zito has apologized for his statement, saying he didn’t mean to offend, it was just his personal opinion, and he’d clobber any man he caught beating a woman.

What do you think, was he just playing a “tough guy” role in his first statement, or is his apology sincere? Watch below and you decide.

UPDATE: It seems Zito has even quit Twitter over the backlash from the “haters”.