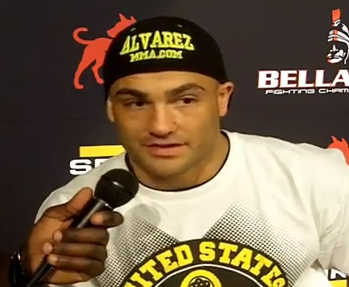 In an official statement released by Bellator, their President Scott Coker said in meetings with Alvarez’s team, including his manager Glenn Robinson it was obvious Alvarez wanted to leave Bellator. It is no secret that this was Eddie’s desire. For years he has lobbied to leave the company and fight in the UFC organization. Now it appears he has reached the light at the end of the tunnel.

“We’ve granted Eddie his unconditional release,” Coker stated. “Eddie is free to explore the free agent market, we hold no matching rights, and we wish him the best in the future. We sat down with Eddie and his team a few times, and it became pretty clear early on that he just wasn’t interested in fighting for Bellator in the future. We want guys in this organization that want to be here, and after the history Eddie and the former regime had here at Bellator, we decided to move on. We wish Eddie the absolute best of luck with whatever is next for him. It’s a new chapter for everyone involved.”

“This was a long process, but it’s a decision that everyone seems happy with,” Alvarez stated. “I think it’s important to say that I am genuinely thankful for my time at Bellator. I know that sounds a little crazy given everything I went through, but I’ve fought there since 2009, and have been involved in some really amazing fights. The staff there always treated me great, and I’m going to miss seeing a lot of those familiar faces around for sure. Myself and my team had some really good discussions with Scott, but in my heart I knew I was ready to move on and start the next chapter in my career.”

Was this a smart decision by Eddie? We think so. Where you at Dana?