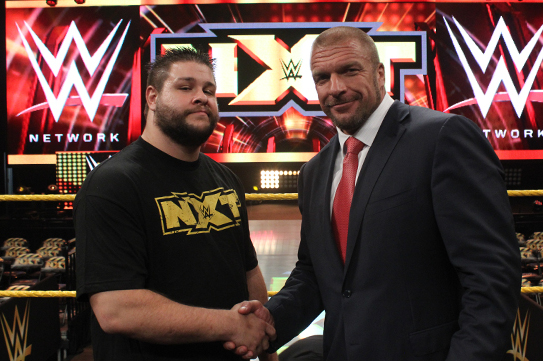 With the signing of the hottest free agent, Prince Devitt, the WWE has secured another positive addition to the future success of a slowly recovering company. Everyone knows the difficulties that the WWE Network has been facing. Slow growth, insufficient purchases, and both of those have crushed the company’s finances forcing them to release long time employees and potentially valuable assets. They are now relying heavily on the unseasoned crop of potential superstars they snatch up from the local shows around the country.

There are a lot of promising stars in the WWE, but one that signed recently has sparked interest from the more established stars. His name is Kevin Steen and he is a magnet on the microphone and a large man. His size doesn’t stop him from being a quick, agile, and dynamic performer in the ring. Check out this ridiculous flipping leg drop from a standing position.

Steen is a Ring of Honor standout and an independent circuit star on par with CM Punk when he was competing in the same small promotions. Steen has a lot of momentum and buzz surrounding him, especially now that he is signed to the WWE developmental system, their minor league promotion called NXT. Check out the excitement the excitement on Twitter his signing caused with top stars, including The Rock.

Seth Rollins: “The @WWENetwork goes global AND @FightSteenFight on the same day?? Times are certainly a changin’. #weretakingover #buyin”

The Rock: “@FightSteenFight Welcome to the club homeboy. Very happy for you and your family. #MoveTheCrowd #HaveFun #WellPlacedSunsetFlips”

In short, the big guy is the total package and like all WWE fans we are all silently praying that the WWE creative doesn’t ruin him by using the tired formula. He comes in, he wins a lot, they put him in a program with John Cena and he is instantly sent by the wayside. It is a documented fact that superstarsin the know events report consistently that Cena is a company man, but absolutely pushes to be in the spotlight when a hot talent comes in to the picture. If they mess this one up shame on them.

Here is a decent look at his skill set. What do you think of the signing?