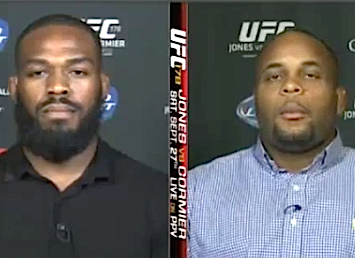 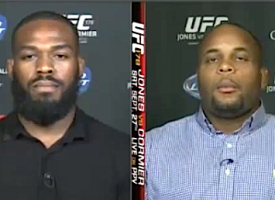 If you’re the UFC light heavyweight champion of the world, Jon Jones, and you’re going to make a death threat against your upcoming opponent, Daniel Cormier, you might wanna make sure your microphone and the camera aren’t recording the whole thing.

It all started with the UFC 178 media day brawl on Monday. Jones and Cormier then went on ESPN SportsCenter to explain the incident and why things got carried away. However, during an apparent break when Jones thought the mic and camera were no longer running, he took the smack talk to a whole new level.

Jones: Hey p-ssy, are you still there?

Cormier: I’m here. I’m here. You’re just the fakest person. I actually admire that you can just be this fake, and when like that TV comes on, how you can just change. It’s like you’re a chameleon. It’s awesome.

Cormier: It’s awesome. It is unbelievable.

Jones: The fact that you’re a p-ssy hasn’t changed.

Cormier: It’s unbelievable how fake you can really be. It’s like you’re just such a f-cking p-ssy. My God. It is amazing. It is amazing. But hats off to you. You’ve got a great PR person because they do a great job of training you because you are just terrible. You’re the scum of the f-cking Earth. You are a terrible human being. But you can sure turn it on.

Cormier: I wish they would let me next door so I can spit in your f–king face.

Jones: You know I would absolutely kill you if you ever did something like that, right?

Cormier: You could never kill me.

Jones: I’m not saying I would fight you. I said I would kill you if you do some silly sh-t like that.

Cormier: So Jon, do you think I’m just going to sit there and let you kill me, Jon? I mean, really?

Watch the video for yourself below:

Do you think Jones will face any repercussions from the UFC for this? First off, they could still face penalties for the press conference brawl, and now this. This is definitely not the type of image the UFC wants to portray, that’s pretty certain. And neither does Nike, for that matter. This is not over, not by a longshot.
[ads1]
[ads2]