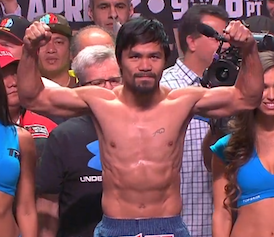 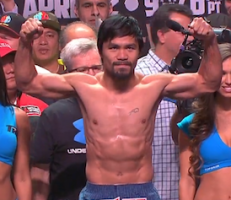 Manny Pacquiao won’t be stepping into the cage any time soon, but he now has a connection to mixed martial arts after purchasing an undisclosed number of shares in the Asian-based One Fighting Championship, CEO Victor Cui confirmed to Yahoo Sports.

“I’m pretty pumped,” Cui said. “There are a ton of reasons why I’m pretty excited about this. Obviously, Manny Pacquiao is a global sports icon and having him as a part of our organization as a shareholder and promoting One FC and promoting the sport is huge for the sport in the region. It promotes awareness and growth.”

Cui described Pacquiao as a “relatively new MMA fan.” Pacquiao has a series of gyms he owns in Asia and all of them offer MMA classes and MMA training areas.

Manny as an MMA promoter in the Philippines? That could be pretty big. The UFC’s market in Asia is growing, but having the Pac-Man as part of ONE FC and promoting shows in the Philippines would likely be some real competition for the UFC, in that region – if Pacquiao actually gets involved himself in the promotion duties… and hopefully like Ray Sefo did, he will one day fight in MMA in his own promotion. That would be huge.

Cui talked about Manny trying on some 4-ounce ONE FC MMA gloves (as opposed the the 8-ounce boxing gloves):

“You could see him calculating the difference from the boxing gloves to the MMA gloves,” Cui said. “He said to me, ‘Man, someone could get hurt with the power of my punches if I could wear these.’ “

Let’s just hope we get to see that day.

There were rumors awhile back of UFC purchasing ONE FC. What could it all mean?