UFC lightweight and MMA veteran Jorge Masvidal is really pushing for a fight with top 10 lightweight Donald “Cowboy” Cerrone. He called out Cerrone in the UFC on FOX 12 post-fight press conference. He has now taken to the UFC on FOX Facebook account to respond to all of the people who picked him to lose to Daron Cruickshank. Masvidal survived a huge right hand that knocked him down to score a unanimous decision win at the UFC on FOX 12 event on Saturday night. Check out some of the responses from “Gamebred”: 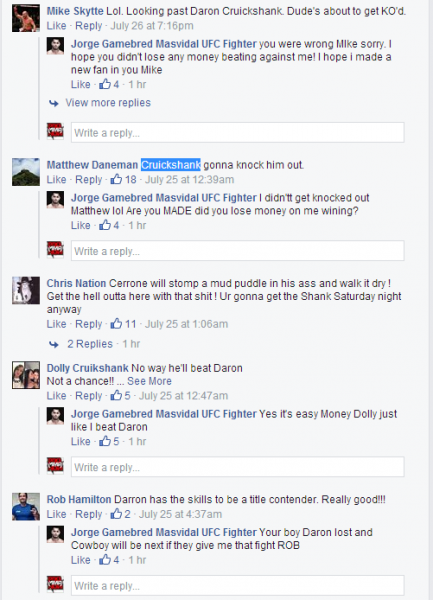 Masvidal (27-8) is currently ranked #14 in the world by the UFC website and is (5-1) in his last six fights. The lone loss came against Rustam Khabilov who has since tested positive for a banned substance. Masvidal has been in there with some of the best in the world, including a unanimous decision loss to former Strikeforce lightweight champion Gilbert Melendez in 2011.

Do you have any interest in watching Masvidal take on Cerrone?