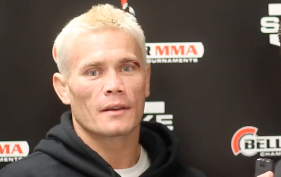 A knee from Diego Sanchez knocked Joe Riggs out at UFC Fight Night “Sanchez vs. Riggs” in 2006 and also knocked him out of a roster spot. Fast forward 21 appearances elsewhere and Riggs returns to the Octagon. He replaces Mike Rhodes at UFC Fight Night 51 and will meet Paula Thiago.

Riggs went 15-6 as a journeyman. He fought under the Strikeforce banner, Pro Elite and eventually won the one and only Bellator Fight Master series with a decison victory over Mike Bronzoulis.  The 31 year old has stayed active and has been impressive at times. Few people probably remember his win over Nick Diaz but it happened. He is on a tear as of late, winning his last 6 fights. His opponent hasn’t been as successful.

Paulo Thiago as won only one of his last five fights. Thiago made his debut back at UFC 95 and started out winning three out of four, beating the likes of Mike Swick and Josh Koscheck. He’s only won two fights since 2010.

Here is a look at the fight card as it stands.