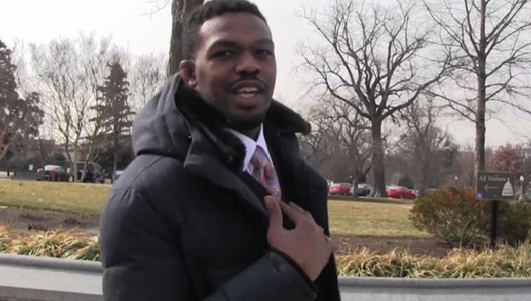 Not much to say here because it pretty much speaks for itself. This is Jon Jones’s little girl telling the world who’s going to win the fight between her father and top contender Daniel Cormier. Then, for good measure, she stamps it with a Bones Jr. guarantee.

Jon Jones was originally slated to face Alexander Gustafsson on September 27th, but since Gus got injured Daniel Cormier gets his chance at the belt. We reported this news as it happened HERE.

Jones and Cormier have exchanged trash talk since the first day Daniel Cormier spoke Jon Jones’s name. Everything intensified the moment DC dropped to light heavyweight. We all knew this fight was bound to happen and things would heat up as soon as it did. As Light Heavyweight Champion Jones has been the target of harsh words from just about everyone he has ever defended against. Rashad, Rampage,and even retired former 205 pound king Chuck Liddell. Cormier is just the next one and the next man to face him inside the fenced battleground.

Jones is no stranger to critical words, either. He has been accused of playing it safe since he became champion in the way GSP was criticized for fighting not to lose instead of moving in for the kill. Granted, Jones is a highly skilled athlete when it comes to all aspects of the sport. His wrestling, striking, and even jiu-jitsu are ridiculously high level compared to most light heavyweights in the top 10.

Bones’s game face is pretty much one of disgust that seems to ask the question of why he even has to step in to the Octagon with undeserving minions. Jones has endured harsh criticism from Dana White as well. The champion’s refusal to fight the replacement for an injured Dan Henderson, hype man Chael Sonnen, at the last minute and that refusal got UFC 151 cancelled. This was the first event cancelled in UFC history and a very big deal with high media visibility.

Cormier and Jones promises to be a barn burner and one that may define his reign as the Light Heavyweight Champion. If his daughter has anything to say about it, her daddy is going to continue his winning ways.