In case you live under a rock you may have missed the fan boy news that Nikki Bella had a wardrobe malfunction on this week’s RAW episode. While defending her twin sister Brie, Nikki ended up on the mat and her nipple popped out causing young fans to have simultaneous voice changes across the country. Instantly the IWC, internet wrestling community, began posting, Tweeting, and Facebooking the pictures like wildfire. Check out the picture of the clothing mishap and prepare yourself for greatest nip slip #1.

Now, it’s no secret that twins are sometimes overly competitive. Keeping that in mind, almost a year ago to the day her twin sister Brie suffered the same misfortune and sent the internet in to a frenzy. 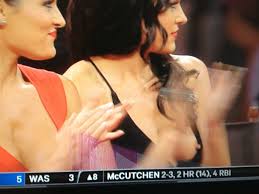 The best parts of RAW sometimes come in small, fleshy packages. The Bellas are extremely popular with young girls and the coveted 18-35 male crowd that keeps the WWE in business. This is the kind of bonus footage that keeps young men’s attention.

If I was the WWE I would have one of these every week. Like a Where’s Waldo kind of thing. The first person to Tweet that they saw it wins a prize. Do you realize how many DVR’s would be full of WWE programming. Frame by frame advancement in hopes that a nipple would peek out from under it’s cloth or vinyl hiding place?

I know this is the PG era and yes it’s silly to post about these things sometimes, but hey man this is the Bella Twins. You can’t blame us right?

9 thoughts on “The 2 greatest nip slips in WWE history”