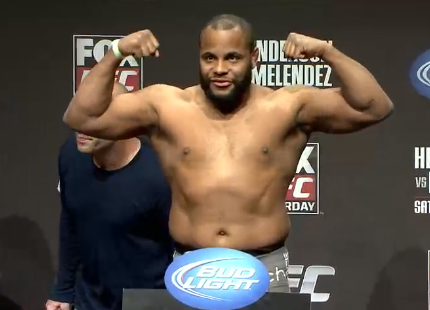 No. 1 light heavyweight contender Alexander Gustafsson has suffered a knee injury that has forced him to withdraw from his UFC 178 bout with champion Jon Jones. As a result, No. 2 contender Daniel Cormier will challenge Jones for the UFC light heavyweight title on Saturday, Sept. 27 at the MGM Grand Garden Arena in Las Vegas.

Undefeated at 15-0 in his pro career, Cormier owns UFC victories over the likes of Frank Mir, Roy Nelson, Patrick Cummins and Dan Henderson. A two-time U.S. Olympian and former standout wrestler at Oklahoma State University, Cormier has long been considered a potential threat to Jones’ reign as 205-pound champion.

He and Jones have traded words in the press for months regarding a potential fight and their feud only intensified once Cormier moved to the light heavyweight division at the start of 2014. This heated rivalry will now finally be settled inside the Octagon® on Sept. 27 in what could be one of the biggest events of the year.

An updated UFC 178 press tour schedule, as well as ticket information, will be released in the days to come.

What do you think, you like this match-up better than the rematch between Jones vs. Gustafsson? This Cormier vs. Jones fight was bound to happen sooner or later. We’re about to find out just how good Cormier really is.