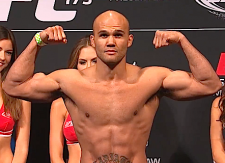 The UFC on FOX 12 event is set to take place on Saturday night at the SAP Center in San Jose, California. The event is heavily anticipated and will be headlined by the welterweight number one contender fight between Robbie Lawler and Matt Brown.

The co-main event will  feature a light heavyweight scrap between Anthony Johnson and Antonio Rogerio Nogueira.  It looks like it’ll be an exciting card on paper, so let’s take a look at five huge questions going into the event.

Does Matt Brown have enough fire power to get past Robbie Lawler?

Make no mistake, Matt Brown is one of the most exciting fighters in the UFC and is capable of putting opponents away violently. However, he’ll face a guy that’s just as violent as he is on Saturday night in Robbie Lawler. Lawler seems reinvented since coming back to the UFC, and we’ve seen him take incredible strikes that don’t seem to face him. We’ve seen Brown takes incredible shots as well, but he does seems to be weak in the midsection, as we saw him hurt really bad in his last fight against Erick Silva. If Lawler gets him in trouble, it would be nearly impossible for Brown to avoid getting finished at that point. I certainly don’t expect this one to goto the judges.

Can UFC on FOX 12 reach the coveted 3 million viewers mark?

The UFC on FOX 11 event averaged 2.5 million viewers, but the card was void of star power and didn’t have the NFL marketing muscle behind it. The UFC on FOX 12 event seems to be heavily anticipated and shouldn’t have to deal with much competition on Saturday night. I’m beginning to see promotion for the event to uptick during baseball games, so it’ll be interesting to see what numbers this event can pull on Saturday night.

Should Antonio Rogerio Nogueira be a +373 underdog against Anthony Johnson?

Hear me out. I know Anthony Johnson just steamrolled Phil Davis in his last matchup, a fight that many(including myself) expected Davis to win with his wrestling. I know that Nogueira hasn’t fought in over a year, but it should be noted that he did defeat highly ranked former champion Rashad Evans in that matchup. Nogueira is battle tested, isn’t afraid to stand in the pocket with his boxing skills, dangerous on the ground, and has only been knocked out once in his storied career. I think Johnson will probably win, but I would not be surprised if Nogueira gave him all he could handle.

Will Dennis Bermudez use Clay Guida as a stepping stone?

Bermudez has quietly won six fights in a row and will face one of the greatest gatekeepers of all time in Clay Guida on Saturday night. Guida is difficult to finish and has a habit of winning razor close split decisions from the judges. Bermudez will need to perform at his highest level to leave no doubt should he not be able to finish Guida. The top of the featherweight division is beginning to get crowded, and the winner of this fight will look to join the masses after Saturday night.

Will Bobby Green pull off the upset against Josh Thomson?

Green has rattled off seven consecutive victories since 2011, but will face his stiffest challenge in former Strikeforce lightweight champion Josh Thomson on Saturday night. The two fighters have a common opponent in Pat Healy. Green won a unanimous decision  in December, and Thomson submitted him in 2010. Healy has a similar style to Thomson in that it’s more grappling/pressure based. If Thomson isn’t able to close the distance and/or get Green to the ground he could certainly lose this fight. Green tends to be defensive at times without offering a lot of offense, but he’ll need to be in attack mode with this being a three round fight. It’s a very interesting fight and will the age of Thomson(who’ll be 36 in two months) begin to come into play? Thomson has battled injuries his entire career, and often time fighters at the lighter weights can look ‘old’ all of a sudden. Be sure to tune into see how it all plays out on Saturday night.

Also, be sure to make ProMMAnow.com you home for all of your UFC on FOX 12 coverage this week!