5 things the WWE needs to do after Battleground 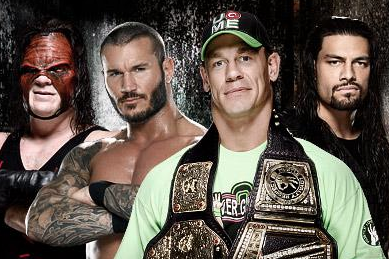 To think that last year Ryback was the poster boy for the WWE’s 2013 Battleground PPV. Now he wasn’t even on the pre-show….

5 things need to happen starting now to make the lead-up to SummerSlam memorable and here they are.

If the track record for WWE is any indication of Ambrose and Wyatt’s futures respectively the prognosis isn’t good. Typically when a young talent is hot they unintentionally, unless you piss off HHH, bury them. Dolph Ziggler, CM Punk, Daniel Bryan, and many more were victims of the WWE shovel, and were buried at one time. There clearly needs to be someone who can step up for WWE creative, and recognize what talents they have in Ambrose and Wyatt.

No one in the WWE right now can touch this pair in terms of mic skills, not even Chris Jericho. They have unique styles and they sound much different than the pre-scripted, God awful Big E, Sheamus, and pretty much any Diva given the microphone at any time ever promos. They could steal the show, which is why we will not see them together.

Once the WWE picks their top guy to sell merchandise for them it’s over for anyone else. Roman Reigns, despite being green, has the look and the WWE is pouncing on it. They tried this with Jack Swagger, Dolph Ziggler, and Cody Rhodes and they all fell flat at that time despite having the marketability. Plus, Bray Wyatt is a guy that gets booed during the match, but cheered making his entrance most of the time. Who else has that happen? Oh yeah, John Cena, but Bray Wyatt doesn’t grant sick children’s wishes and garner mainstream attention. John Cena is absolutely the most human of all the WWE superstars in terms of compassion caring for kids. What a great guy. That being said, Wyatt can never compete with that image the WWE touts often.

Ambrose has the look, originality, and everything else he needs to break away from the pack. Bray Wyatt has what it takes to get there along with him. This feud, given it’s proper time and respect from management, could rival any of the top feuds in the WWE.

Paul Heyman’s client Brock Lesnar conquered the streak in case you haven’t heard him say it a billion times since Wrestlemania. Then because of his part time contract with limited dates Lesnar promptly disappeared again. Brock Lesnar has to come back and be the beast again if the WWE wants to keep interest in Cena’s world title reign. Roman Reigns is a fan favorite, but most smart fans do not feel like he could be booked against Cena and win yet. Brock certainly has that necessary uncertainty when it comes to whether or not he might dethrone Mr. Fruity Pebbles.

Lesnar is also the one person who could put Reigns over and cement him as the next big thing if that is what the WWE is preparing for. This would have to culminate at Wrestlemania and Reigns would have to win out of nowhere. The fans are getting tired of predictability and there are so many setup moves wrestlers have now that telegraph the ending of a match that sometimes good guys get booed. Stone Cold didn’t really have a setup move, and neither did DDP. They hit their finishers out of nowhere and the crowd exploded whereas Reigns’s spear has been used over and over again and pretty much ruined by Edge. Stick with the Superman punch please Roman. It’s spectacular and looks amazing. That has to be the finish at Wrestlemania for Reigns to be over.

WWE – Once the fans find out you are pushing a guy that they are behind for marketing purposes that wrestler loses momentum. See Randy Orton’s reign when the crowd was chanting Daniel Bryan. The fans wanted Bryan at that time and are similarly now getting behind Reigns. Let’s hope it stays that way because we as fans want to pick the stars and not have them crammed down our throats.

Lesnar has to be champion after he did what no one else could do and beat the Undertaker at Wrestlemania.

Lesnar ends the Undertaker’s streak at Wrestlemania 30 in this video.

Fandango and the Total Divas angle has to go

We do not want to see soap opera drama on TV unless it involves butt kicking.

Fandango’s song gets chanted at events by fans who simply want to participate in what every other city has done before them on TV. Look at the “What” chants as an example. The single most annoying chant in the history of the WWE, and we can thank Steve Austing for those. It ruins any chance of any promo ever gaining steam once people start that chant. Thank god they stopped with them when Lana was speaking or Rusev would be done for.

Wanna know why Randy Orton and HHH keep rambling? It’s because they are talking quickly to counteract the what chants. The Miz in a desperate attempt to keep fans attention plays in to that chant because if he didn’t the channel gets changed when his ultra rated G bad guy starts blabbing.

Fandango is terrible as a wrestler they had to try and use him in another way so they slapped Summer Rae and Layla in the mix to push their Total Divas show down our throats. Guess what WWE, very few people watch that show that care about RAW. Fandango has to move on because his segments are garbage that waste valuable time on an already thin 3 hour RAW program.

Typical example of the garbage we are forced to sit through with Fandango.

The most over, or fan appreciated, guy in the WWE that the creative team for some reason ignores. the rumor is that it is because of these comments about WWE protected, Golden Boy John Cena’s limited wrestling skill set.

Fan video of his Royal Rumble 2014  entrance to a good crowd response.

Dolph Ziggler continues to be punished because he is currently outspoken about the treatment of mid-card wrestlers and the lack of chances to shine. Again, the more the WWE tries to cram the Randy Ortons and Kanes down the WWE Universe’s collective throat, the more the crowd rebels. Dolph Ziggler should at the least be the Intercontinental champion and if the crowd continues to lobby for it then it just may happen like it did for Daniel Bryan.

Let’s be honest here shall we? We all see the monster push Roman Reigns is being handed by the WWE brass. Rollins has no chance of ever being champion until maybe after Reigns has that belt around his waster. So what can you do with his briefcase to make it relevant?

Seth should play mind games with champions. Walk out and appear to be waiting for someone to win, ready to pounce. Add a little anticipation to the thing. What makes the most sense to me is for Rollins to cash in on Roman Reigns if indeed it is Reigns vs Brock Lesnar for the championship at Wrestlemania 31 next year. A feud between the two would be amazing. Differing styles, Rollins’s mic skills, and Reigns amazing physical prowess could parallel the Steve Austin vs. Shawn Michaels feud from the “Attitude” era.

Terrible quality, but here is Seth Rollins winning this year’s Money In the Bank briefcase.

Those are 5 of the many things the WWE should do to prepare for their usually epic SummerSlam event in August. What do you think they need to do?