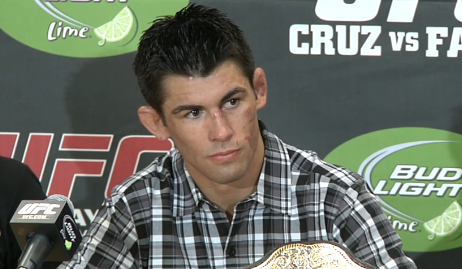 Former UFC bantamweight champ Dominick Cruz (19-1) hasn’t fought inside the UFC Octagon in nearly three years, but will finally make his return when he takes on number six ranked Takeya Mizugaki (20-7-2) at UFC 178 on Sept. 27. How will the long layoff affect the 28-year-old Alliance MMA product when he steps back into the Octagon for the first time?

Mizugaki is currently riding a five-fight win streak, most recently defeating Francisco Rivera via decision in May. Cruz has won his last 10 in a row and still only has one blemish on his record, a March 2007 submission loss to Urijah Faber at WEC 26 for the featherweight title.

Shortly following the loss to Faber, Cruz dropped down to bantamweight where he eventually won the WEC 135-pound title with a TKO win over Brian Bowles in March 2010.  Cruz successfully defended his WEC title once, defeating Joseph Benavidez via decision, before the UFC purchased the organization and he was grandfathered in as UFC champion.

Cruz successfully defended the UFC bantamweight title three times, racking up wins over Scott Jorgensen, Urijah Faber and Demetrious Johnson, before suffering an ACL tear that resulted in multiple surgeries due to his body rejecting the cadaver replacement. He was finally scheduled to return in February of this year against interim champ Renan Barao, but suffered a groin tear and subsequently relinquished his title.

Now all healed up (again) and with the stars aligned (so far), Cruz is ready to return to action against Mizugaki in just a few short weeks. A guest on Friday’s episode of Inside MMA on AXStv, Cruz shared his thoughts on his upcoming opponent:

“He’s [Mizugaki] had a lot of wars, he’s got a huge heart, he’s extremely durable, he’s got power in his hands, he’s a good counter-fighter, solid boxing and he’s extremely hard to take down up against the cage and in certain areas. He’s got a lot of experience, and great cardio for days. So, I’ve seen him fight Miguel Torres, Urijah Faber; he’s got a lot of high profile fights under his belt so he believes in himself and he knows he belongs in the top five. And that’s exactly the kind of opponent I want to challenge myself with coming back. I just want to prove I belong in there against one of the best and he’s on a five-fight win streak, so as far as I’m concerned, it’s a good way to start this back out.”

Cruz is known for his unorthodox and unpredictable style. He uses a lot of footwork and movement to get in and strike and get back out before his opponent can return fire. He mixes up his striking well with takedowns and has a fast-paced well-rounded game that makes him hard to deal with.

But will he be able to pick up where he left off? Have those in his division passed him up while he has been injured? That’s what we’re going to find out on Sept. 27. According to Cruz though, he has actually improved and has added new weapons to his arsenal. He also talked about how his analyst job with FOX Sports has helped him mentally:

“I’ve had a lot of time to mature and grow in the sport. I’ve watched countless hours of film because I’ve been doing the stuff on FOX, and following around my teammates, cornering them. I’ve just learned so much over this time I’ve been out. Even though I’ve been out I feel like I didn’t lose a step because of what I’ve learned mentally in the game. Definitely I’ve added a lot of things to what I do in fighting already and I definitely feel like there will be some things that will be different coming with this fight, things that I will do and have added to my arsenal, for sure.”

Whether Cruz will get an immediate shot at his former title with a win over Mizugaki is not yet known. It will likely depend on how good he looks. TJ Dillashaw currently holds the UFC 135-pound title and will defend it against Renan Barao in a rematch on Aug. 30 at UFC 177.

Watch the full interview with Dominick Cruz below on Inside MMA as he also talks about the challenges of getting his body back in 100% fighting shape: