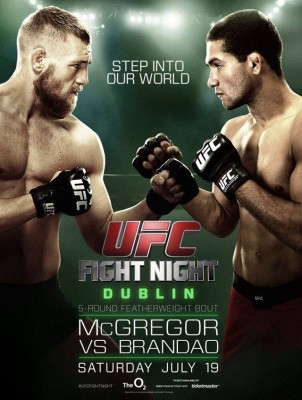 The action kicks off this afternoon at 12:30 p.m. ET and the entire event will be shown exclusively online on UFC Fight Pass (subscription only). ProMMAnow.com will provide LIVE results and round-by-round updates for all the fights.

Round 1 – Holohan is the local favorite and is being the aggressor to start. Samp lands a nice shot. Holohan looks a bit nervous, understandably but delivers a huge uppercut that drops Sampo. He follows up with ground and pound but Sampo survives and goes for an armbar. Holohan escapes, takes Sampo’s back and locks up the rear-naked choke forcing the tap out and this Dublin crowd goes nuts!!

And based on this crowd’s reaction Patrick Holohan is the champion of the universe! #UFCDublin

Round 1 – Donovan takes the center right away but gets backed to the cage with punches from Krylov. Goes to the ground as Donovan looks for an armbar. Krylov escapes and it’s back to the feet, but Donovan takes him back to the canvas. Donovan lets him up where they exchange some heavy shots. Donovan takes a low blow and time out is called. Back at it and Krylov landing some nice shots before Donovan rocks him with a shot and puts him on his back, taking full mount. Krylov gives up the back as Donovan looks for the choke. Krylov escapes and lands big shots as Donovan turtles. With Krylov on back mount he pounds Donovan until the ref stops it just before the bell. Crowd goes silent.

Round 1 – Lot of clinch-fighting and dirty boxing during the first half of the round. Smith landing some nice leg kicks, but getting a bit sloppy and Troeng takes advantage with a big left hook counter, catches a kick and take Smith down. Smith right back up though, landing a knee. Back to the clinch-fighting against the cage. As they separate Troeng lands a nice front kick to the body. Smith looks to be more tired after the round. Too close to call.

Round 2 – Early takedown from Troeng. Briefly gets full mount, but Smith sweeps him and lands some ground and pound before Troeng gets back up where they resume the clinch-fighting. After separating briefly Troeng scores another takedown but gets caught in a guillotine. Troeng survives until the bell. Another close round.

Round 3 – Low kick from Smith, Troeng tries to set up a takedown with punches but it’s stuffed. It eventually goes to the ground with Troeng riding Smith’s back, but a scramble ends up with Smith on top in half guard. Troeng is able to get back up briefly, but Smith puts him back down and controls from top. With under a minute to go Troeng trying to get to his but Smith controls him with a choke and punches, then puts him back on his back before the bell. PMN sees this round for Smith 10-9. The first two rounds are harder to score. I think Smith won the fight though.

Round 1 – King silences the crowd with a quick takedown but Pendred right back up. King going right back for the takedown but Pendred defends. King  clearly wants to put this fight on the ground. He gets his wish as Pendred drags him down with a bodylock. King right back up and lands a right. King drops him with a big right and is trying to finish with big shots. Over 2 minutes left in the round. KIng takes full mount, lands shots until Pendred gives up his back. King going for the choke, flattens him out with punches. Pendred busted up pretty good now. Still over a minute left. King switches to an armlock attempt but Pendred survives and they are back to the feet. Great fight. PMN sees it 10-9 for King.

Round 2 – Couple of overhand rights from Pendred, leg kick, beautiful rear uppercut. Body kick from King, but Pendred picks him up and puts him on the ground with a bodylock. King back up, takes Pendred down. Now they’re both back up. Couple of lefts and a head kick from King. Pendred fires back and shoots in, gets King to the canvas and is looking for his back. Pendred lands some nice punches, gets both hooks in and chokes Mike King unconscious. This crowd is going berzerk after that amazing comeback victory for the Irishman.

Round 1 – Harris looking to take the fight down. Seery drops him with an overhand right with just under 3 minutes left in the round. Ref lets Harris up and Seery is stalking, looking to capitalize. Nice left hook from Seery. Stiff jab from Harris, then a left hook, another one. Seery fires back as Harris goes for the single leg. Stuffed. Big left hook from Seery. Harris shoots, but gets pushed over on his back. Seery stands up and lets Harris up. Harris shoots, gets shrugged to the canvas. Back up. Big right hook from Seery, trying to take his head off. Big body kick from Seery. Harris takes an eye poke at the bell. PMN scores it 10-9 for Seery.

Round 2 – Harris shoots straight away, stuffed. Seery stalking. Another takedown attempt stuffed by Seery. Right hook from Harris. He gets clipped in the next exchange but is able to score a takedown finally. Seery is able to get back up pretty quick though and they go back to swinging with Seery stalking and landing a couple looping shots. Seery throws Harris to the canvas, kicks his thighs. Harris back up. Seery takes Harris down before the bell. PMN scores it 10-9 for Seery.

Round 3 – Seery takes a low blow and time is called. Back at it. Seery stalking again. Harris shoots, stuffed. Seery has some nice boxing skills and just looks way more comfortable on the feet during this fight. Harris shoots, stuffed. Right hook from Seery, leg kick. Harris lands a jab or two. Nice body shot, then a left upstairs from Seery. Seery showing some damage over his right eye. Harris ends up on his back after a failed takedown attempt. Seery lets him up and hurts him with a counter left. Harris goes to the ground where Seery tries to finish with big punches. PMN scores it 10-9 for Seery and the fight 30-27 for Seery.

During the @NeilSeeryMMA fight the crowd got to 103 decibels!!! A rock concert is 110.

Round 1 – Big leg kick from Latifi, another, and another that causes Dempsey to hobble. Right hand from Dempsey. Another big low kick from Latifi. Latifi drops him with the next leg kick, then drops him again with punches and finishes him off. Easy-peezy-Ilir Latifi. OFFICIAL RESULT: Ilir Latifi def. Chris Dempsey by knockout (strikes) Rd 1 (2:07)

Round 1 – Kotani’s takedown attempt stuffed. Parke pressing as Kotani continues to try and set up the takedown. Elbow inside from Parke after clinching against the cage. Neither fighting letting loose yet after nearly 4 minutes. Nice right punch, left elbow combo from Kotani. Parke stuffs another takedown, takes Kotani’s back, dropping huge elbows before the bell. PMN scores it 10-9 Parke. Round 2 – Low and high kicks from Parke to begin. Stuffs another takedown attempt. Stalking Kotani, clinch takedown after a brief exchange. Parke in side mount where he drops elbows. Kotani uses a leglock attempt to escape to his feet. Parke gets Kotani back down and pounds him out.

Parke says he wants a “top 20 opponent next” … “Diego Sanchez, where you at punk?” LOL love it.

Round 2 – McCall with a takedown but Pickett gets right up, eating a right hook on the way up. Trip takedown from McCall, goes right to full mount. Pickett trying to sweep, gets him in half guard. Pickett gets to his feet. McCall’s footwork throwing Pickett off a bit. Nice left from McCall. Body kick from McCall. Pickett swinging hard but he’s whiffing.  PMN scores it 10-9 McCall.

Round 3 – McCall landing leg kicks as Pickett chases but doesn’t cut the cage off. Finally PIckett gets a hold of his legs against the cage for a takedown attempt, but McCall defends, lands a knee and backs out. Nice exchange, Pickett gets a trip takedown but McCall is right up. Big body kick from McCall, then an uppercut and a right. Takedown from McCall with about 90 seconds left. PMN sees it 10-9 and 30-27 for McCall.

McCall calls out Demetrious Johnson after the fight.

Round 1 – Knee on the clinch break and a right hand from Nelson. Cummings having a trouble finding his range against the karate stance of Nelson. Right hand from Nelson. Cummings clinches up looking for the takedown. Nelson defends successfully. Body shot from Nelson. “He’s like the Prius of MMA fighters,” says commentator Dan Hardy about Nelson and his economy of movement. Nice exchange before the bell. Fairly close round. I think Cummings, although was missing a lot, was more aggressive and maybe landed more shots. Too close to call really.

Damn, kid has skills. Looked terrible in the 1st and then turned the fire up in the 2nd for the finish.

Round 1 – McGregor dancing to Biggie Smalls inside the Octagon after making his entrance. Brandao booed… of course. The place erupts for Mr. McGregor. Everyone is on their feet.  Every one. I just saw a Conor McGregor look-alike, suit and all. They touch gloves before going back to their corners. Conor with a spinning back kick. Head kick from Brandao, again. Conor with a couple punches and Brandao fires back. Brandao pushes him to the cage, looking for a takedown. Conor grabs the cage to prevent it, turns Brandao around. You can barely hear the commentators for all the cheers. Clinch fighting against the cage, Brandao gets him down but Conor reversed it on the way down. Conor stands up and tries to lay in guard, takes an up kick as Brandao goes for a leg. Conor escapes and is landing punches, remaining calm. Brandao kicks him off and gets up, getting tagged in the process. They’re trading in the pocket. “Whoop there it is” chants. Conor drops Brandao with a left and punches him out. The place is going completely NUTS.

McGregor says he wants to go back drink some whiskey with Mr. Fertitta and talk about “world titles and football stadiums”.

When he's not talking crap about me, I kinda like the kid lol