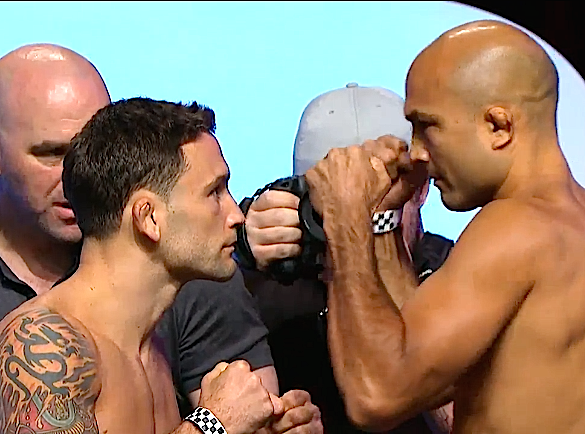 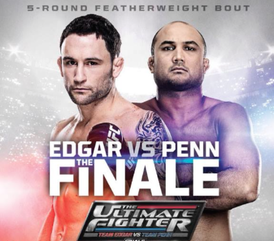 The event is headlined with a featherweight trilogy fight between TUF 19 coaches BJ Penn and Frankie Edgar. Win or lose, this could be the last time we see Penn inside the Octagon.

The card also features the heavyweight and middleweight finals of The Ultimate Fighter season 19, with Corey Anderson facing Matt Van Buren at 205-pounds, and Eddie Gordon vs. Dhiego Lima at 185-pounds.

ProMMAnow.com will provide live results of the entire event, with play-by-play commentary of the main card. Preliminary card action kicks off at 6 p.m. ET on UFC Fight Pass, moving to the FOX Sports 1 prelims at 7 p.m. ET, and the main card on FOX Sports 1 at 9 p.m. ET.

Round 1 – Ortiz presses early, clinch against the cage and Ortiz puts him on his back with a takedown. Ortiz in half guard, looking for full mount. Scoggins using a butterfly guard, and trying to lock up an armbar. Ortiz stacks him to defend. Scoggins has it locked up tight, goes belly down with it but Ortiz survives it and is back up. Scoggins pressing him to the cage now. Scoggins gets a quick takedown but Ortiz right back up. Scoggins puts some knees to the thighs before they separate to the center. Ortiz’s arm may be damaged but you can’t tell it, as he throws some punches. Ortiz gets Scoggins down during a scramble, back up and Scoggins turns him to the cage. One minute to go. Scoggins drops levels and he goes for a guillotine in a scramble but Ortiz is out and clinched against the cage, Scoggins leaning on him. 30 secs left. Trip from Scoggins, as he gets a body lock from the back. Ortiz breaks free and lands a nice one two combo. Pretty close round… PMN sees it 10-9 for Scoggins.

Round 2 – Scoggins takes the center with a big leg kick. Ortiz stalking. Side kick Scoggins. Body kick, then a left hook from Ortiz. He shoots for the single and gets Scoggins to the mat. Ortiz holding the single as Scoggins tries to counter. Ortiz gets Scoggins flat on his back and takes side mount. Ortiz trying to pass guard with knee to belly. Scoggins gains full guard, Ortiz moves to half guard, where he’s able to drop some right hands and elbows. Ortiz controlling good from here and staying busy. Scoggins to his feet but Ortiz has a body lock from the back and he drags Scoggins back down where he’s landing body shots and punches to the head. Ortiz in side mount. Scoggins regains full guard with a minute to go. Nice body shots from Ortiz. Scoggins throws up his legs to look for an armbar but nothing there for him. Ortiz lands more elbows and punches before the bell. PMN sees it 10-9 Ortiz.

Round 3 – Nice knee and right hand from Scoggins. Big left from Dustin. Head kick from Ortiz. Nice left hook, body shots follow. Some dirty boxing from both. Uppercut and a right from Ortiz. Leg kick from Scoggins. Big straight left from Ortiz. Scoggins secures a counter-takedown. Now inside Dustin’s full guard with 3 minutes to go. Scoggins in half guard now. Ortiz gets to his feet, eats a right on the way up. Clinch, knee from Scoggins, again as Ortiz’s takedown attempt is stuffed. Scoggins presses him to the cage. He drops levels and gets Ortiz to his butt. 2 minutes to go. Ortiz hits the switch and presses Scoggins to the cage, drops levels for a takedown attempt, they battle it, but Ortiz gets him down. Under a minute to go, Ortiz on top inside full guard. Body shots from Ortiz as Scoggins holds on. Rides the round out on top. PMN sees it 10-9 for Ortiz, and the fight 29-28 for Ortiz.

Round 1 – Touch gloves. Lewis misses a couple kicks. Guto avoids a leg kick. Front kick from Inocente. Lewis stalking, gets the clinch and presses Inocente to the cage. Knee from Lewis, drops levels for the single leg takedown but Inocente right back up. Right haymaker from Lewis, clinch, knee from Guto. Lewis lands a big overhand right. Clinch against the cage, Inocente is able to escape to the center. Leg kick from Inocente, Lewis times it for a takedown. Lewis dives in but misses with a big right. Inocente trying to scramble from half guard but eats three big right hands from Lewis that knocks him out. POWERFUL “Black Beast” Lewis.

Round 1 – This should be a good fight. Touch gloves. Gordon pressing. Leg kick Lima. Right hook from Gordon. Jab from Lima. Right from Gordon, another and Lima bounces lightly off the cage. Huge overhand right rocks Lima, another one drops him and Gordon tries to finish. Lima gets to his feet but gets dropped with an uppercut. Gordon is dropping atomic bombs on Lima — looking like sledgehammers pounding his skull. DONE. DONE. DONE. Welcome to the UFC Eddie Gordon. That was quick. If you didn’t know already, Gordon is part of the same Serra/Longo team as UFC middleweight Chris Weidman, who had a big win just last night.

Round 1 – Anderson showing a jab. Body kick from Van Buren. Nice punch combo from Anderson before he takes Van Buren down. He makes his way back up but he’s eating punch after punch. Somehow he is still conscious but gets taken down again. Anderson continues to drop big punches that force referee Mario Yamasaki to stop the punishment. Two quick tournament finals tonight. Welcome to the UFC Mr. Anderson.

Round 1 – Penn looks like a Buddha, or a Shaolin monk. Looks in great shape at 145 lbs. Penn fighting very tall. Edgar using his footwork and boxing, lands a leg kick. Penn looks funny the way he is so upright. Nice punch combo from Edgar. Edgar takes advantage of Penn’s upright stance and takes him down, but does not stay in his guard. Stands up kicks his legs, then goes in. Postures up with a right. Penn has him inside guard now, feet on hips. Edgar stands back up. Kicking at the legs. He dives back in and BJ has feet on hips. Edgar stands back up, kicking the legs again. Not able to do much on the ground. Edgar goes back inside guard. One minute to go. Penn defending the ground and pound, but not attempting any submissions. Ref lets BJ up. Big left hook from Edgar scores. Now a right hand. Nice body/head combo from Edgar. PMN sees it 10-9 Edgar.

Round 2 – Nice right from Edgar, leg kick. Three punch combo from Edgar. Overhand right, shoots, puts Penn on his back. Edgar dominating this fight with ease so far. Edgar postures up with right hands. Stands up now, kicks the thighs. Goes back inside guard, landing a right hand in the process. Edgar stacks him with ground and pound, passes to half guard and postures up with big shots. Nice elbows from Edgar, looking for the finish as he turns it up. Edgar smashes him. PMN sees it 10-8 for Edgar.

Round 3 – Nice punch combos from Edgar. Penn not even reacting, just staying on his tippy toes dancing around. Kind of sad to watch really. Head kick from Edgar, punch combos from Edgar. Edgar trips Penn to the canvas. Nice right from Edgar from top position. Edgar dropping elbows and Penn is opened up and bleeding profusely over his left eye. More elbows from Edgar, now landing several punches as Penn does nothing except flail his arms. Referee Herb Dean finally stops the mutilation. That was just sad. Probably the worst gameplan from Penn as I’ve ever seen from a fighter. That will likely be his last fight in the UFC.

Penn’s words after the fight: “I shouldn’t have came back. I shouldn’t have been in the ring tonight. … Dana said it was over. I’ve got to agree with him at this point.”