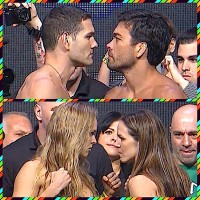 “UFC 175: Weidman vs. Machida” takes place this evening from Mandalay Bay Events Center in Las Vegas, and is headlined with a middleweight championship bout as title-holder Chris Weidman puts his 185-pound belt on the line against former 205-pound champ Lyoto Machida.

ProMMAnow.com will provide LIVE results and play-by-play commentary for UFC 175, beginning with the Fight Pass prelims at 7 p.m. ET, moving to the FOX Sports 1 prelims at 8 p.m. ET, and then the PPV main card at 10 p.m. ET.

AFTER THE FIGHTS: Watch the UFC 175 post-fight press conference

Round 1 – Casey drops Bush with a punch combo straight away. Casey now on top in half guard, working the ground and pound with short hard left elbows until Bush goes unconscious and the fight is stopped. That is the Kevin Casey we’ve been waiting for in the UFC.

Round 1 – Leg kick Font. Right hand from Font. High kick from Roop blocked. Clinch, Roop presses him to the cage. Knees to body. Right elbow from Font on the break. Lead left hook from Roop, overhand right. Jab. Jab from Font, nice leg kick. Inside leg kick from Roop. Huge overhand right from Font clips Roop and he goes down, this fight is over folks. One hitter quitter for Rob Font in his UFC debut. Font is out of Mark Dellagrotte’s camp.

Round 2 – Nice left from Santos, body kick from Camozzi. Santos catches him coming forward and picks him up for a big slam. Santos inside full guard. Camozzi landing some elbows off his back. Santos not able to get anything going, and ref calls time briefly so Santos can put his mouthpiece back in. Santos passes to half, then side mount. Two minutes to go in the round. Camozzi recovers full guard as Santos tries for full mount. Camozzi opens Santos up with an elbow from off his back. Santos secures head an arm and passes to side mount. Camozzi is able to get to his feet but Santos immediately puts him back down where he lands a couple shots. Camozzi gets full guard before the bell. PMN sees the round 10-9 for Santos.

I don’t understand how all could score it 30-26… seems very odd, or someone made an error somewhere, either writing it down or reading it.

Round 1 – Leg kick from Caceres, Faber shoots, stuffed. Faber trying to get a bodylock takedown. Clinched against the cage now, knee from Faber. Knee from Alex, hopping knee and a right hand. Scramble, then a right hand from Faber, he scores the takedown and is inside full guard now. Body shots from Faber. Right from Faber. Elbow. Faber postures up with a right elbow. Alex holding him tight. Faber picks him up for a small slam. Faber postures up, drops a right. Big elbows from Faber, nasty, still inside guard. Lands a few right hands. Caceres looks for the upkick then springs to his feet and takes a knee to the body before the bell. Faber domination 10-9.

Round 2 – Right hook from Faber over the top, scores a quick takedown after that. Inside Caceres’ guard. Alex looks at a triangle but Faber pulls out and postures up. Alex is able to get to his feet with 4 minutes left. Low kick from Alex, then he lands a lead uppercut and a straight left combo. Big body kick from Alex, Faber catches it and trips him but Alex is right back up. Faber has a body lock from the back but Alex gets free and turns around landing a knee to Faber’s body. Faber pressing him to the cage, drops levels for the takedown. Faber goes for his back as Alex gets up. Elbow from Faber on the break. Alex stalking. Side kick to the neck from Alex, then a spinning round kick to the leg. Faber presses him to the cage, takes a knee to the body. Another. Faber judo tosses him but Alex gets right up. Faber presses him to the cage, looks to drop levels but Alex defends it. Alex flubs a Thai plum and knee attempt. Faber controlling against the cage. PMN sees it 10-9 for Faber.

Round 3 – Caceres stalking, lands a right hook on a clinch break. Leg kick. Clinch, Alex catches a knee and presses Faber to the cage. Left from Alex on the break. Leg kick. Again. Faber catches it and dumps him. Faber takes his back and locks in the rear-naked choke with both hooks in. Caceres taps out.

Round 3 – Nice counter one two from Hall, inside leg kick. Nice jab. Inside leg kick. Santos with same. Side kick hits Hall in the gut. Big overhand right from Hall scores. Inside leg kick. Nice big left to the body from Santos. Head kick scores for Santos. Spinning back kick to the body from Hall, low then high kick. Body kick, right hand from Santos. Inside leg kick for Hall. Hall takes a jump kick to the groin. OUCH. Broken toe, now a broken ballsack. F*ck this. Pay me m*therf*ckers. That’s what I’d be thinking. Back at it. Santos shoots, gets a body lock from the back. Santos with knees to the backs of the thighs. Left hook from the back. Hall attempts a kimura and rolls with it but Santos is free and that’s it. PMN sees the round 10-9 for Hall, but the fight 29-28 for Santos. Could go either way though. Fairly close fight.

Fight called off due to Struve suffering heart palpitations (panic attack) and a “near fainting spell”. Due to his previous heart condition, the doctors felt it better he not compete tonight. THAT SUCKS BALLS.

Round 1 – Davis looking pretty calm. Rousey with a mean mug to rival any 209-er. Shoulder slaps, check. I predicted a Rousey win in rd 1. They come out swinging. Overhand right by Rousey, she judo throws Davis to the mat and Ronda knocks her out from side control. Maybe the fastest title fight in UFC history. Davis is trying to fight the referee as she is still regaining consciousness. They just said it is second fastest title stoppage in UFC history. I honestly thought it was an early stoppage until I saw Davis completely out of it trying to take referee Yves Lavigne down for like 20 seconds before they could get her to stop and realize the fight was over. Replay showed her go limp. KO’ing someone from a side headlock position is not easy. Pretty crazy how good this girl is getting. Her aggression is unmatched in the UFC. Please bring in Holly Holm next.

Round 3 – Touch gloves. Jab from Weidman. He blocks a couple Machida kicks. Weidman shoots, Machida slips out of a single leg attempt. High kick from Machida blocked. Left from Machida, stuffs a takedown. Couple jabs from Weidman followed by a nice takedown. Weidman inside his full guard. Machida with a couple elbows off his back. Nice sweeping elbow from Weidman, and I see blood on Machida’s forehead. Weidman takes his back briefly but Machida is out an d on his feet. Weidman rocks Machida with a couple punches. A big right left from Weidman on the button put Machida on his bike. Step in knee from Machida but Weidman puts him on his butt. Machida gets to his knees, eating punches to the side of the head. Weidman picks him up for a ride, and Machida is back on his knees. A bloodied Machida back to his feet. Looks compromised. Throws a high kick that’s blocked. PMN sees it 10-9 Weidman.

Round 5 – Inside leg kick from Machida. Seems to have been in the groin. Weidman throws a lazy combo and gets countered quickly. Left from Machida scores on the button, countering a front kick. Weidman shoots, stuffed and Machida makes him pay with a left. Couple of knees in the clinch from Weidman. Then a right. They’re slugging it out in the pocket. Weidman tags him and wobbles him. Machida firing back. Amazing action. Leg kick from Weidman. Both guys with their hands down. Big elbow from Weidman wobbles Machida. Left from Weidman, he then scores a takedown. Weidman lands an elbow and is working from half guard. Just over a minute to go. Machida gives up his back, both hooks in. Weidman flattens him out, then Machida gets to his feet. He breaks free. Couple right hands from Machida and he’s going off still looking for the finish with combos as Weidman is backed against the cage. Amazing amazing fight. PMN sees the round 10-9 for Machida but the fight 3 rounds to 2 for Weidman.

One thought on “UFC 175 LIVE results and play-by-play”