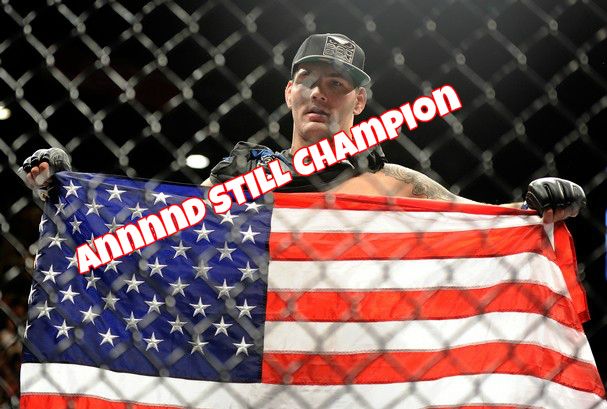 Make no mistake about it, Chris Weidman is the real deal . He has had to battle his critics who say that his wins over Anderson Silva were flukes. He won’t have to hear that about his win over Lyoto Machida.

The first round was five minutes of feeling out for  both Machida and Weidman. Weidman opened the stanza up throwing kicks. He kept pushing the pace and in true Machida fashio, he tried to be elusive by moving away from the champion. Weidman put in the most work and took the round.

The second round saw the action pick up some. Machida was looking like he was coming back until late in the round he was taken down by Weidman. Weidman was able to sustain his position until the round ended. The third round saw Weidman start to really distance himself . He dropped Machida and followed it up with a great exchange the opened up a cut to the face of Machida.

Tides began to turn in the fourth. Machida started landing shots and looked to rock the champ on a couple of occasions. The first championship round saw Weidman take some damage and start to slow. Machida picked up the pace and was able to stuff a late takedown attempt.

The final round was a toss up. The first half was all Machida. Machida was the fresher of the two and was able to land some shots. Midway through the round Weidman landed some big elbows that opened up the challengers cuts a little more. He followed up with a big takedown. He was able to take the back of Machida. Lyoto was able to get up with about 30 seconds to go. Machida bombs Weidman with seconds to go but it was too little too late.

Weidman was tested and tried but a strong three rounds carried him to victory.