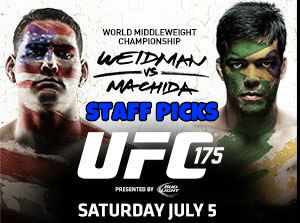 Happy Birthday America! What better way to start the weekend than by putting the great minds at ProMMANow together to pick some fights. UFC 175 takes place tomorrow in Las Vegas. Chris Weidman will represent the red, white and blue as he looks to defend his middleweight title against Brazilian Lyoto Machida. American Olympian Ronda Rousey will try to keep her belt ass Canadian challenger Alexis Davis tries to do what no woman has done to date.

Stay close to ProMMANow (www.prommanow.com) for full coverage of the event tomorrow and watch the weigh-ins later today right here.

How about some picks!

Tyler Saito – Brimage hasn’t competed since McGregor KO’d him, while Doane picked up a submission win in Singapore. Nothing about Brimage has impressed me so far in his career. Pick – Doane by Decision.

Jack Bratcher – TUF 14 veteran Marcus Brimage is 3-1 in the Octagon, while Russell Doane, the former Tachi Palace bantamweight champ, is 1-0. Doane is coming off a submission of the night win over Leandro Issa. Brimage last fought in April 2013, when he suffered a TKO loss to Conor McGregor. Oddsmakers have this dead even, with a couple giving Doane the edge. I like Doane’s experience advantage and seemingly more well-rounded game. He also won submission of the night in his UFC debut which is quite impressive, not to mention he’s held FIVE different titles in FIVE different organizations before coming to the UFC.  Pick- Doane by Submission.

Gary Thomas– Oddsmakers can’t make a decision on a favorite nor does anyone much care about this fight. Why is this kicking off the pay per view..WHY?! I think Brimage has been out too long plus he has that memory of a beatdown from Connor McGregor. I woke up super early to watch Doane’s UFC debut. Toss up! Pick – Russell Doane by Submission.

Kelvin Hunt-Toss up fight….the cage rust for Brimage scares me…but losing to McGregor has proved nothing to be ashamed about. I’m going with Brimage via decision.

Tyler Saito –  Hall has a TON of potential and this is the perfect fight to showcase it. Santos is overmatched and it should show. Pick – Uriah Hall by TKO Round 1.

Jack Bratcher – Uriah Hall is 1-2 inside the Octagon, while Thiago Santos is 1-1. Both of Hall’s UFC losses were via split decision, to John Howard and Kelvin Gastelum. Hall has the makings of a superstar and still holds the greatest KO in TUF (and possibly UFC) history. His striking is amazing to watch and I see Santos being a showcase type fight for Hall, and adding another KO to his highlight reel. Pick – Hall by KO.

Gary Thomas – Thiago Santos is a relative unknown having been in Brazil and has only won one fight in the Octagon. This should be a showcase fight for Hall and a fight that he can win for sure. I think Hall has to let loose though. Pick – Hall by KO.

Kelvin Hunt- Hall should be able to take this one.  Hall via TKO.

Tyler Saito – Mitrione is very one dimensional, but Struve is coming off of a long layoff. Struve is better pretty much everywhere so I expect him to pick a win up. Pick – Struve by Submission Rd 1.

Jack Bratcher – Matt Mitrione is coming off a KO win over Shawn Jordan, while Struve has been out of action with his medical condition since getting KO’d by Mark Hunt in March 2013. Mitrione is clearly progressing, but I think Struve’s height, reach, ground game and experience will all factor in here. Struve should take this one either via submission or decision. Pick – Struve.

Gary Thomas – I don’t see Mitrione having anything to answer the skill set of Struve. The only thing that may hurt him is that he’s been out dealing with health issues. The return will be great though. Pick – Struve by Submission.

Kelvin Hunt – Similar to the initial fight prediction…the cage rust for Struve scares me a bit.  However, he has the advantage everywhere in this fight except maybe his chin. Mitrione has been cold cocked before too though….Struve via submission.

Tyler Saito – Davis is good, but Rousey is on another level. This fight will be a little tougher for Rousey but she will get it done in the end. Pick – Rousey by Armbar Round 2.

Jack Bratcher – Ronda Rousey is a different level of athlete than Alexis Davis. If you look at Rousey’s recent training videos you can tell a marked difference in her progression, speed and power. This girl is only getting better. Davis is pretty good at everything. Rousey is a master at judo, a grand master of the arm bar, and she’s applying that elite level training and focus to her striking — and it shows. I’m not sure if this fight will end via knockout or submission, but Rousey will win this fight in the first round via stoppage. Hopefully the UFC signs Holly Holm soon for Ronda’s next challenge. Pick – Ronda Rousey Round 1.

Gary Thomas- The hard core women’s fan base have long been saying that Alexis Davis is the biggest threat to Rousey.  I’m no expert but I’d say that this is incorrect. Rousey will be faster and more smothering than anyone Davis has fought. This shouldn’t last real long. Pick – Rousey by Submission Round 3.

Kelvin Hunt – Davis certainly has a shot at defeating Rousey if the fight goes past the third round. She has a zombie chin and has a steady workrate offensively.  Will Rousey look to take her down or look to keep it striking? Not sure, but it’s a fight that Ronda should win because she’s just a more physically gifted athletic and will have a huge speed advantage. Rousey via TKO late.

Tyler Saito – Machida will use his excellent footwork to stay out of Weidman’s range. He’ll pick Weidman apart on the feet and pick up the decision win. Pick – Machida by Decision.

Jack Bratcher – With two dominating wins since dropping to middleweight, over Munoz and Mousasi, Lyoto Machida seems to be at his optimum fighting weight. Machida is the better striker than Weidman, there’s no doubt about that. To compete with Machida on the feet, Weidman will need to stay in his face and pressure him. Weidman’s best bet would probably be to get it to the ground and look for a submission. Trying to grind out Machida for five rounds seems nearly impossible, although Phil Davis (and somehow) Quinton Jackson did it at light heavyweight. I love this fight because it really could go either way, but I’m leaning toward Machida. Pick – Machida by (T)KO.

Gary Thomas – Tom Petty will set the tone and Chris Weidman will set the pace for the fight against Machida. This will be a five round battle but I think Weidman uses a mix of wrestling and striking to out point Machida in an instant classic. Pick – Weidman by Decision.

Kelvin Hunt – When this fight was first announced I was leaning towards Machida because of the style matchup. Weidman having BOTH knees scoped just a couple of months ago raises my antenna’s too…however, Weidman is a very underrated wrestler and I think that will be the difference. Weidman’s wrestling translates to MMA much better than Phil Davis or other guy’s that were more heralded. Davis was able to get Machida down a couple of times and even strike with him competitively somewhat. Weidman is a better striker than Davis and has unusually long arms for someone his size. Weidman gets it down here either decision or submission.