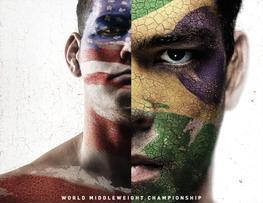 According to the betting lines, there are two mismatches on this card. That’s not how I feel about it. I think there’s one mismatch and I’m about to tell you what it is… you probably already know. How presumptuous of me.

The UFC 175 co-main event between Ronda Rousey and Alexis Davis is a mismatch; by the fight odds and in my own opinion. 5Dimes has the numbers:

The oddsmakers have one more fight on this card as a mismatch, and that is the bantamweight match-up between Urijah Faber and Alex “Bruce Leeroy” Caceres. Here’s the numbers on that fight:

If you just look at their records, who’s fought who, all the title fights Faber has been in, etc., one could deduce that Faber is a pretty large favorite here. But if you watch The MMA Hour, you know our man Caceres has been experimenting with Ayahuasca, and he largely credits his cosmonaut experiences with the vast improvement in his skills and his performances inside the Octagon. Who knows if it has really helped him… but something has. The improvement he’s shown over the last couple years has been impressive (see record).

We know what Faber brings to the table. It doesn’t change that much. But Caceres continues to evolve and I think this will be his “coming out party” so to speak. I’m not saying Faber can’t beat him, but these odds aren’t accurate in my opinion.

Do you think Davis has a chance against Rousey, and do you think Caceres is ready for the Faber’s of the world?
[ads1]
[ads2]