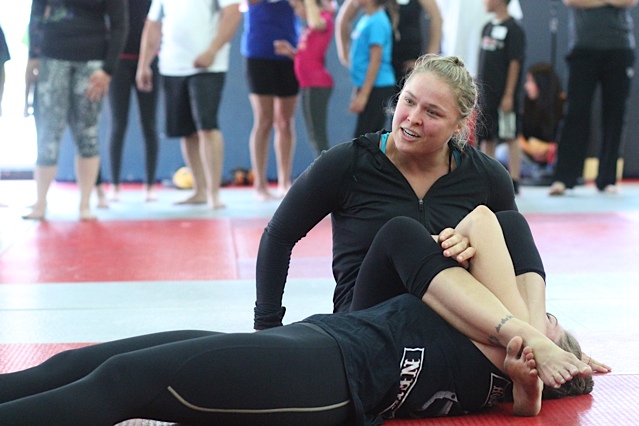 Judo vs. Jiu Jitsu, it’s an old martial arts debate that could play out before our eyes once again on July 5th when UFC women’s bantamweight champion and Olympic judo medalist, Ronda Rousey, takes on BJJ black belt Alexis Davis at UFC 175.

Rousey remains unbeaten in her career with nine straight stoppage victories. However, the 27-year-old champ has yet to face a BJJ black belt such as Davis. Rousey sees no problem though and seems eager to prove once again why she is considered the top female fighter in the world.

Rousey discussed the point on this week’s episode of The Great MMA Debate podcast with Damon Martin:

“It’s definitely an interesting new challenge. One thing that I couldn’t stand when I was just watching MMA and coming from Judo was all these people talking about how the Jiu Jitsu people would beat any Judo player. It was such a stereotype that I thought, and still think, that I could beat any girl in the world, any weight division, gi or no-gi, black belt and in any ruleset they want, in just pure Jiu Jitsu.”

“I really feel like the Judokas that do excel in Newaza, which is our term for groundwork, have never really gotten enough respect. This fight against Alexis, who is a Brazilian Jiu Jitsu black belt and the kind of person I’ve heard my whole life should be the type to tap me out no problem, would be nice to prove a point against her. Then again, I always have people saying that my striking is terrible and she’s a well-noted Muay Thai fighter so any way that I can beat her I think would prove a good point.”

Is the UFC’s first lady just being overly cocky or is this the type of self-belief that has made her the champion she is today? And although Davis has had her way with the likes of Rosi Sexton, Liz Carmouche and Jessica Eye, does anyone REALLY think she has a chance against Ms. Rousey?

And if Rousey did compete in just a pure BJJ match (gi or no-gi), who would you like to see her go up against? How about Kyra Gracie?

Did you know: The most famous judo vs. BJJ match took place back in 1951 when Helio Gracie fought Masahiko Kimura.