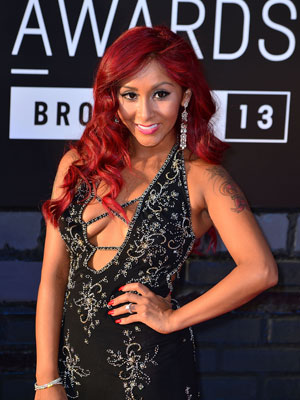 MTV reality star Nicole “Snooki” Polizzi, who hosted RAW back in 2011 and then wrestled at WrestleMania 27, appeared on Chris Jericho’s Talk Is Jericho podcast recently to shamelessly plug her own new podcast and she flat out said that she’s interested in returning to WWE after she has her second baby.

“I’m actually begging to go back because I want to wrestle more.”

Snooki is currently preggo with her second kid, but she swears she’s making sure to keep in great shape.

“Just having more muscle and being more flexible, I feel like can do more moves in the ring. It was such a fun experience that I would definitely go back for more.”

Snooki in the WWE full time maybe? Not surprising since she is a walking, talking controversy. That sounds like an epic train wreck recipe so, yeah. I’m totally watching that crazy ass sh*&!

Nicole Elizabeth “Snooki” Polizzi (born November 23, 1987)  is an American reality television personality, dancer and professional wrestler who is best known for being a cast member of the MTV reality show Jersey Shore and currently stars in Snooki & Jwoww. Since the show’s debut in 2009, Polizzi has gained popularity by appearing on talks shows including The View, The Ellen DeGeneres Show, Jimmy Kimmel Live!, Late Show with David Letterman and The Wendy Williams Show. She is also one of the highest paid reality stars, earning $150,000 per episode as of season five. She also appeared as the guest hostess for WWE Monday Night Raw in 2011 and competed at Wrestlemania 27 that same year.