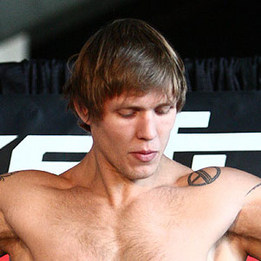 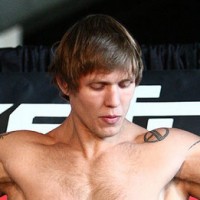 If you plan on tuning in for World Series of Fighting 10 this weekend, hopefully you will also watch the preliminary card on WSOF.com and enjoy some of the other great match-ups on this card. One fight in particular that has gained some buzz is a battle of the heavyweights, as Dave “Bad Man” Huckaba squares of with Derrick “The Caveman” Mehmen.

Huckaba, who defeated WSOF president and K-1 legend Ray Sefo back in August, is the oldest competitor on the WSOF roster aside from Sefo himself. Derrick Mehmen on the other hand, feels that he has yet to reach his prime and full potential as a martial artist and made sure to heckle Huckaba about his age on Twitter. Be ready for fireworks when these two throw down on Saturday!

Derrick was kind enough to speak with ProMMANow and discuss his beef with Dave, his title aspirations and much more.

Answers from Derrick are italicized.

Thank you for time as always Derrick. How was your fight camp leading up to WSOF 10 this Saturday?

“Camp has been great man, seriously the best camp I’ve had in three years. I feel the best I’ve felt in a while, I worked harder then I have my last couple fights and I’m really excited to get in the cage.”

You’re coming off the win against Scott Barrett at WSOF 8 in January. When we spoke before that fight you mentioned that you were looking for the knockout in the second round. Were you disappointed that couldn’t get the finish? Was Scott a tougher opponent than you originally expected?

“Yeah man, I was very disappointed that I didn’t finish and I could have finished him. Like I said, this has been the best camp I’ve had and I didn’t train the way I should have for that fight. If I would have had the gas tank that I have now, I definitely would’ve been able to finish him. I almost had him finished in the first round, I dropped him twice and I kind of blew my wad. After the first round I conserved energy and just coasted the rest of the fight, I should have taken him down and finished on the ground. But I was pretty happy with my performance considering I was so tired. Scott’s a tough guy and he took everything I had, the shots that I dropped him with would have knocked out most guys.”

I must say, the hair you had for that fight certainly complimented your nickname “The Caveman.” Can we expect to see that same wild hair for this fight?

“Nah, I got my hair cut. It’s funny you mention that though, we were talking about it before I walked out. We were saying that I looked like BamBam.”

Did you take any time off after that fight? Or did you jump right back into training?

“I took a little time off to relax. You know I have a five year old daughter, and I’m about to get married, so I just spent some time with my family and hung out. I got right back into the gym a few weeks later though.”

Congratulations on the marriage sir, when is the date?

“I’m actually getting married the Monday after my fight. We’re getting married in Vegas so it’s going to be super fun. We’ll do the fight, have the bachelor and bachelorette party and then get married on Monday.”

I’m guessing your fiancé has been begging you to come out of this fight with now cuts or bruises?

“Yeah man (laughs). She said, ‘I don’t care if you get beat up and have a black eye, you’re still taking pictures.'”

So in an ideal scenario, if you come out of this fight unscathed, how many more times would you like to fight this year?

“Dude, I’d like to fight three or four more times this year. I would love it if they would have me fight in August, October and December. I want to fight four or five times a year.”

Your opponent on Saturday is Dave Huckaba. He’s a big guy with knockout power. What do you think of him as a fighter and where do you feel he will be most dangerous?

“I think Dave is a tough guy, he’s a tough brawler and that what he’s good at. If he gets you to brawl with him then he can catch you. I don’t feel like Dave is a technical guy in anything he does, but he has power in everything he does. His best chance of winning this fight is to catch me in one of those wild exchanges.”

Does his age play a big factor in your opinion?

“Yeah definitely. I’ve been giving him shit on Twitter about being old and I think I made him pretty mad actually. I was telling him that he has one foot out the door already and that I have brochures for retirement homes to give him after the fight. All he could think to say was ‘You’re not ready for me,’ I think he’s really delusional. He seems to think that he’s doing me some huge favor by fighting me, like he’s stepping down to fight me and I’m not on his level. I don’t get it but I think it’s funny, I get a good laugh out of it. He gets super angry, it’s so funny.”

I would disagree with Dave as well, you are both on the cusp of fighting for the first WSOF heavyweight title. Has there been any talk of an eventual HW title fight? Would you agree that you’re one of the prime candidates?

“I definitely think I’m the front-runner for sure. To be honest with you, WSOF is doing a great job promoting all the other weight classes. Welterweight is booming with Fitch, Burkman and my boy Steve Carl. The 135’ers have Moraes, Gaethje is at 155, the women’s division, but is there even any other heavyweights? I think I might not even get a chance to fight for a title.”

That kind of answers my next question. If you win this fight on Saturday, is there anyone at all that you could see as potential match-up for the title?

“Not really man. I know there’s people on Twitter that are saying to give Pedro Rizzo a fight but I don’t think he would deserve a title fight right off the bat. I guess they could have Mike Kyle and Rizzo fight, then fight the winner of our fight. I don’t know man, I just don’t think they have anybody. There’s not a lot of heavyweights in the world, good heavyweights are hard to come by.”

That being said, I know you have told me before that heavyweight is much more comfortable for you, but would you consider dropping back down to light-heavyweight if it meant you could challenge for a title?

“It’s funny you say that, I was just talking to someone about dropping back down but not for a title necessarily. I was saying that after I beat Huckaba, I’ll take some time off and try to fight Tyrone Spong. Let’s make that fight happen. I respect that he’s a world class kick boxer but let’s see what happens with someone who can actually take him down and really push him to the limit. I feel like I’m the guy in World Series of Fighting who could do that.”

Since we are talking about title fights, I was wondering if I could get your thoughts on your friend Steve Carls’ fight with Palhares and an update on his recovery?

“His recovery has been going great. He’s already sparring, the guy is an animal. He was up training at Grudge with Gaethje and all those guys and he’s doing great. The fight with Palhares wasn’t really even a fight, Palhares didn’t even throw a punch. If Steve wins a couple times and gets another shot it would be a completely different fight. I think Palhares is terrified to be in the cage and it shows, that’s why he is always so desperate to get the leg lock.”

You’ve landed on the preliminary card again for this event. Does that bother you or is it just business as usual?

“You know what, it did bother me a lot. It really pissed me off because Ali told me that he would put me on the main card in my next fight. But it’s just business as usual, I’ve got two more fights on my contract after this fight, so let’s get through these fights and see what happens. Maybe some good things will happen after that. It does piss me off though, sure I got to fight on the main card my first fight. But the one time they put me on the main card I got ‘Knockout of the Year.’ Then you keep putting me on the prelims, it doesn’t make any sense.

“The Youtube video of that knockout has more hits then any of the other World Series of Fighting videos. You completely ignore that, ignore my accomplishments in your promotion and keep burying me in the undercard. Huckaba just knocked out the president of the company, we deserve to be on that main card. It’s all politics though, I’m just going to go in there and do my job. There’s a lot of people at WSOF that I really like, but I feel like I keep getting the short end of the stick. Is there politics involved? Yes. But I can’t be angry about it forever.”

All card placement woes aside, this is a really stacked event. Other then your own fight, which bout are you most looking forward to?

Back to the task at hand. How do you visualize this fight with Huckaba unfolding and how do you get your hand raised at the end of the night?

Finally, why should fans tune in for WSOF 10 on Saturday and what can we expect from you going forward?

“Tune in because it’s two powerful heavyweights going at it! Who doesn’t love that? We are not scared to throw hands and you’re definitely going to see a brawl. Be on the lookout for big things coming in the rest of 2014.”

You can watch all the preliminary action this Saturday at WSOF.com and the main card on NBC Sports Network at 10PM ET!

For all the latest WSOF and MMA news, ProMMANow has got you covered!