Exclusive | WSOF Featherweight Champ Georgi Karakhanyan “If Rick Glenn gives me the slightest opening for a submission or knockout, I’m going to take it.” 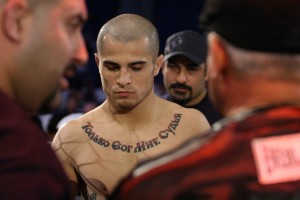 Before Jesse Taylor and David Branch compete for the inaugural middleweight title at WSOF 10 this Saturday, the company’s first champion Georgi Karakhanyan will look to further cement his claim as the best featherweight in the world. Karakhanyan was crowned champ at WSOF 7 back in December with a slick submission victory over top-contender Lance Palmer. Karakhanyan now gets the opportunity to display his skills against the man he was originally slated to challenge for the featherweight strap, Rick Glenn, who was replaced by Palmer after he was forced to withdraw from the fight.

The champion Karakhanyan, who is a product of Glendale Fight Club and Millennia MMA, is eager to get back to work on Saturday and defend his title in impressive fashion. ProMMANow was given a chance to catch up with Georgi before he goes into battle this weekend and as always, the man is ready to put on a show.

Answers from Georgi are italicized.

Thank you for the time Georgi, how has your training camp been thus far and how excited are you to defend your title at WSOF 10?

“Camp has been going great, after the title fight with Lance Palmer I only took about a week off, then I jumped right back into training. Whether I have a fight or not, I am always training and always learning, but the camp for this fight has been great.”

So it sounds like you prefer not to take much time off and train as much as possible in between fights?

“Yeah. With how fast the sport is growing, you should always want to be in the gym but I definitely listen to my body and rest when I need to. I’m always learning and getting better.”

You landed a sponsorship with Reebok recently, how has that relationship been so far and can we expect to see some custom sneakers of your own soon?

“The Reebok sponsorship is going great, we will work on some custom stuff pretty soon but of course I already have some cool walkout stuff for the fight. It’s been really good and I’m looking forward to keeping the relationship as long as I can and hopefully I’m still sponsored by them in my next fight and years to come. I’m really happy to be with such a big brand.”

I’m sure that is one of many deals you have received since winning the title against Lance Palmer back in December. What was running through your mind when the belt was being wrapped around your waist and how much has life changed for you since you became the champ?

“When they put the belt around my waist, all the hard work, blood, sweat and tears had paid off, but I’m not the type of person who is satisfied with what I accomplish, I always want to accomplish more and more as a fighter. As far as my life changing goes, Reebok had been looking at me since I fought Waylon Lowe, but then they picked me up and I’ve done some commercials and photo shoots. Those commercials will probably come out in August. But I’m not trying to be famous, I’m just the same normal person since the first day I started MMA. I just want to work hard and accomplish whatever is put in front of me, continue to reach those goals and just be a better person and fighter.”

Your original opponent in Vancouver was Rick Glenn, before he pulled out and was replaced by Palmer. How happy are you that this matchup is finally coming to fruition and has the extra time to study Rick been beneficial for you?

“Yeah, you know I had no problem with him pulling out the first time because he had some family issues, I understand that family always comes first. I do watch a lot of tape on my opponents and so do my training partners, but I’m pretty sure I know what he is going to bring to the table and I’m sure they know what I am bringing. It’s going to be a really exciting fight.”

Give me your thoughts on Rick as a fighter. Where do you feel he is most dangerous and what kind of fight have you been preparing for in the gym?

“I think he knows how to use his reach very well, he’s long and lanky, throws a lot of kicks and elbows. I like to go in and adjust during the fight, I’ve always felt that a good fighter should adjust in a fight, so that’s the one thing that has changed a lot with me as a fighter. So whatever he brings to this fight, I’m going to be ready and if something isn’t working for me I’ll switch it up  and make sure I get the victory.”

You train at some really well-respected gyms, tell me about your evolution as a fighter and what you have been improving on in training that you will be looking to showcase on fight night.

“Everything, this is mixed martial arts and I’m always improving in all areas. Wherever this fight goes I will be ready and if Rick Glenn gives me the slightest opening for a submission or knockout, I’m going to take it. If not, then I’m ready for a five round war.”

I noticed on Twitter that you seemed frustrated with World Series of Fighting in regards to promoting your fight and you felt like you had to promote yourself. Could you elaborate on that and has the issue been resolved?

“I just felt like I wasn’t being promoted for this fight as a champion. That’s what I was upset about, but I love World Series of Fighting and the promotion of my other fights. I’ll just showcase my skills on the 21st and promote myself in my fight. That’s about it man.”

Speaking of social media, I also noticed that you get some pretty cool fan mail from your supporters in Russia. How does it feel to be a role model now?

“It feels awesome man, the Russian fans have been supporting me since day one when I first fought in Bellator. I have so many people writing to me from Russia, it’s been awesome. I would love to fight in Moscow, but we all know about the stuff going on in Ukraine so I doubt that will happen any time soon. I’m very happy to have loyal fans in Russia and one day I’d like to go there to put on a seminar for all those fans.”

Changing gears briefly, you have been pretty vocal about your dislike for Connor McGregor. Is it just his trash-talk style or was it the things he specifically said about your friend Cub Swanson that made you upset?

“I saw the stuff he was saying about all the fighters and as a fighter I don’t care about him. They asked me my opinion and I gave them my opinion about him. As far as my friend Cub goes, Connor called him an old grandpa and he said Chad Mendes was a 135 pounder. He’s doing good at promoting himself but realistically, if you look at his record, he hasn’t fought very good fighters. He fought Max Holloway, who is a decent fighter and he fought Marcus Brimage who is a 135 pounder. He’s only fought guys who made him look good.

“He’s doing the right thing by promoting himself with talking all the smack he can, but I feel that in this sport, if you’ve won against all the best guys then you should be fighting the best guys. You shouldn’t get those fights just by talking and running your mouth. You can’t just walk in and fight a guy like Cub Swanson or Chad Mendes because you’ll get run over by them, I don’t think he understands that. One day he will learn the hard way.”

Is this the last fight on your WSOF contract? Obviously World Series of Fighting has been good to you, but when you have fulfilled your contract will you and Mike Kogan be looking to maybe sign with the UFC?

Back to the fight this Saturday at WSOF 10. How do you visualize this fight with Rick Glenn going down and how do you get your hand raised at the end of the night to retain your title?

Finally, tell all the fans why they should tune in on June 21st to World Series of FIghting 10 on NBC Sports?

“They should tune in because I have been talking a lot of shit about Connor McGregor (laughs). They should tune in to see some exciting fights, not just my fight, all the fights are going to be great. There’s the women’s title on the line, Jesse Taylor fights David Branch and of course my fight with Rick Glenn is going to be exciting. It should be a great show.”

Make sure you catch all the action this Saturday at WSOF 10! Prelims air on WSOF.com and the main card airs live at 10PM ET on NBC Sports Network!

For more on WSOF 10 and all things MMA related, ProMMANow has got you covered!

One thought on “Exclusive | WSOF Featherweight Champ Georgi Karakhanyan “If Rick Glenn gives me the slightest opening for a submission or knockout, I’m going to take it.””