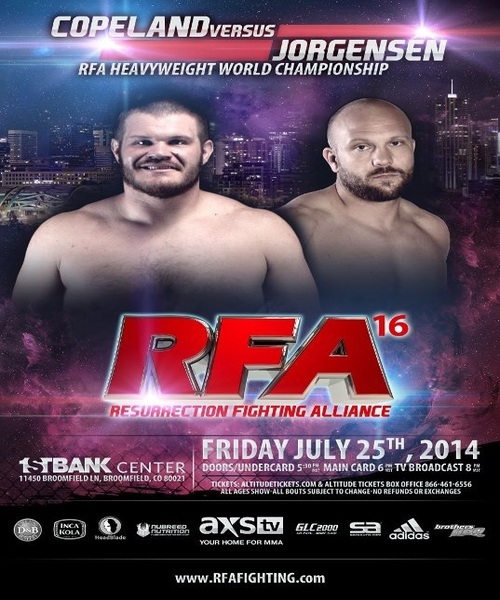 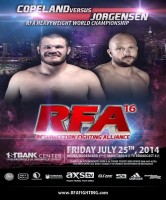 “I’m excited to announce that the RFA will be crowning its first heavyweight champion at RFA 16,” stated Soares. “Josh Copeland and Jan Jorgensen are both very talented fighters from the Rocky Mountains that have never lost. On July 25th, they will give the RFA its first heavyweight champion and our fans in Denver a title fight they will always remember.”

Tickets for RFA 16 – Copeland vs. Jorgensen are available for purchase NOW through AltitudeTickets.com or to support your favorite fighter head to www.CageTix.com/RFA.

Copeland (8-0) is one of the hottest heavyweight prospects in MMA after racking up half of his career victories in 2013. In that time, he picked up a regional heavyweight title and won the regional “Fighter of the Year” and “KO of the Year” honors. Fighting out of the famed Grudge Training Center in Arvada, Copeland is eager to become the first RFA heavyweight champion in front of his home crowd.

“It’s exciting to fight for the RFA heavyweight world title in front of my friends and family,” stated Copeland. “This is a great opportunity. I get to face another tough undefeated opponent on national television for the belt. I look forward to it.”

Jorgensen (6-0) will be looking to rekindle the “Rumble in the Rockies” rivalry between the Rocky Mountain border states of Colorado and Utah. This is a sports rivalry that dates back to 1903 in college football, which happens to be where Jorgensen first made a name for himself. Jorgensen was a star defensive end at BYU from 2006-2009. In that time, he earned the all-time consecutive starts record for the school and #84 became a fan favorite among the Cougar faithful. Upon graduation, Jorgensen made a successful transition to MMA and began competing professionally for his home state’s top promotion Showdown Fights in 2011. He now intends to sack Copeland and pick up the biggest win of his career.

“I’m very happy about this opportunity,” Jorgensen explained. “I’ve been following the RFA for a long time now and have seen really tough heavyweights like Justin McCully and Steve Mocco compete for them. It’s an honor to compete for the first RFA heavyweight title. Josh Copeland is a game opponent and I look forward to facing him on July 25th.”

The co-main event of RFA 16 features the RFA debut of local fan favorite Jarred Mercado (11-1). After compiling an impressive 106-18 record in high school wrestling, Mercado attended Northwestern University and wrestled in the Big Ten Conference. During his four years with the Wildcats, Mercado faced some of the top NCAA Division I competition in the country. After graduating, Mercado continued displaying his athletic prowess inside the cage. In over 3 years as a professional MMA fighter, Mercado has only tasted defeat once in twelve outings.

“I’m excited for this opportunity to showcase myself on national television,” stated Mercado. “I know Joe Murphy is a really good jiu-jitsu guy, but style-wise I know it will go well for me and get me to the next level to win the title.”

Murphy (7-1) is also looking to make his national television debut in style. Murphy is a Cleber Luciano protégé that made a name for himself on the national jiu-jitsu and submission grappling circuit. His success in the “gentle art” has transferred over to MMA seamlessly with 5 of his 7 wins coming by way of submission. The lone loss on his record came with a bit of controversy with WSOF president Ray Sefo immediately tweeting, “No disrespect to Carson Beebe but I thought Joe Murphy won that fight!!” Murphy is now eager to shine on the national stage.

“I’ve been looking at the RFA for awhile and now I get to do it,” Murphy explained. “Not only do I get to fight in the RFA, but it’s the co-main event on national television. I’m going to show the fans that I have an exciting style that is always looking for the finish. I’m fighting a tough guy in his hometown, but whether they are with me or against me, my fight will be the loudest. I want people to be on the look out for me after this fight.”

The main card of RFA 16 will also feature a welterweight contest between Denver’s own Josh Cavan (9-3) and St. Louis native Chris Heatherly (7-1). Cavan carries the momentum of a four-fight win streak and a submission arsenal that has secured six of his victories. Standing across the cage from him will be a man looking to finish showing the RFA fans what he started in March at RFA 13. That is because his RFA debut against Chidi Njokuani was ruled a ‘No Contest’ after an unintentional illegal elbow from Njokuani brought a halt to the bout in the first round. Before that bout, Heatherly had won 7 of 8 bouts.

The main card will also feature a bantamweight bout between a pair of exciting RFA vets as Zac Chavez (2-1) battles fellow prospect Boston Salmon (1-0). Chavez won his RFA debut in March 2013 in a highly-entertaining bout that was later briefly aired during a skit on NBC’s “Late Night with Jimmy Fallon”. Chavez would drop his second fight with the RFA, but is looking to get back to his winning ways and remain unbeaten in front of his home crowd. He will face Salmon, who is dropping down a weight class after defeating Lyoto Machida protégé Perceu Friza via first round TKO at RFA 12. That bout happened to be Salmon’s professional MMA debut and aired on AXS TV. The Las Vegas based Hawaiian is now eager for a follow-up performance.

Also on the main card will be a WMMA bout pitting local favorite Maureen “Baby Face” Riordon (0-0) against Omaha native Lauren Barefoot (1-0). Riordon is in the midst of doing something unique in women’s combat sports. In May, she won her professional kickboxing debut for GLORY via third round KO. In July, she will make her professional MMA debut at RFA 16, and then the following month, she will make her professional boxing debut in the co-main event of the Nordic Coliseum Boxing event that will serve as the first-ever all female boxing event. At RFA 16, however, she faces a tall task in the highly-touted bantamweight prospect Lauren Barefoot, who has made a name for herself in the “Cornhusker State”. Barefoot was unbeaten as an amateur before stopping Invicta FC vet Ashleigh Curry via TKO in her professional MMA debut.

The entire main card of RFA 16 – Copeland vs. Jorgensen will be televised live on AXS TV starting at 10:00 p.m. ET / 7:00 p.m. PT on Friday, July 25th. RFA 16 will be the promotion’s third event in “The Centennial State” of Colorado and the second in the Mountain States region in 2014. More fights on the RFA 16 main card and preliminary card will be announced soon.