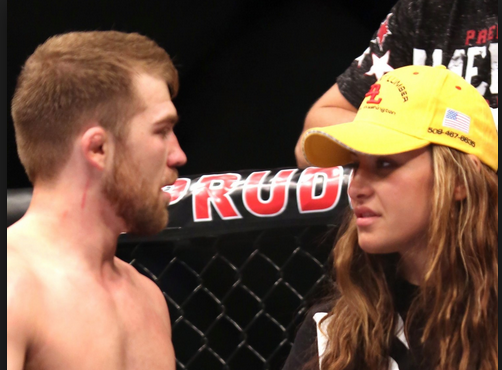 UFC bantamweight Bryan Caraway was seen fishhooking his opponent Erik Perez prior to submitting him via rear-naked choke at UFC Fight Night 42 this past Saturday night in Albuquerque. Caraway has come under fire for his tactics, which girlfriend and UFC women’s bantamweight Miesha Tate has called an accident.

“All you idiots running your mouths about bryan FINISHING his fight via fishhook need to be slapped! First of all he accidentally fish hooked Goyo IN THE FIRST ROUND AND FINISHED THE FIGHT CLEAN IN THE 2nd ROUND!!!!!! Completely unrelated!! Furthermore you can 100% tell the fishhook was an accident BC goyo was able to TURN AWAY from the fishhook which means Bryan had absolutely NO pressure on it aka HE WASNT TRYING TO USE IT OR HE WOULD HAVE RIPPED GOYOS FACE TO THE LEFT INSTEAD OF WHAT ACTUALLY HAPPENED WHERE GOYO TURNED AWAY FROM THE FISHHOOK TO THE RIGHT. and SHAME on Bjpenn. com for a misleading title implying the fishhook had anything to do with the finish. Lastly, GOYO confirmed he DIDNT even realize the fishhook had happened which also confirms there was NO pressure on it or he would have known it had happened. Show me where the “Fishhook” is in the finish? Ya that’s what I thought”

Take a look at the video from two different angles below and decide for yourself if you think the fishhook was unintentional.