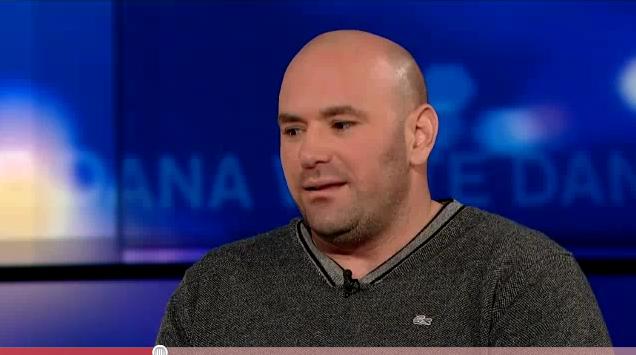 UFC President Dana White was a guest on FOX Sports 1’s “America’s Pregame” Wednesday to share his thoughts on Chael Sonnen failing a random drug test leading up to his July 5th scheduled bout against Vitor Belfort at UFC 175.

White explained who he feels is at fault here and whether or not there’s a problem with banned and illegal substances in the UFC.

UFC president Dana White on if he was shocked by the positive drug test results: “My reaction isn’t shock. This has been lingering. This stuff was legal. TRT was legal and then the Nevada State Athletic Commission said, ‘It’s illegal now, it’s got to go away.’ But, there are going to be effects of stopping this thing cold turkey. It just doesn’t work that way.”

White on if this positive drug test implies other athletes are on drugs: “Nobody is on it. Just to clear the air here, nobody is on TRT. And, we only had five guys out of over 500 that were ever on TRT, and it was absolutely legal. And then the [Nevada] Athletic Commission changed the ruling and said, ‘It is now a banned substance, you cannot take it.’ There are only really two of our big stars that are dealing with the effects of TRT – Chael Sonnen and Vitor Belfort. This thing has been bad since day one and I wish that the Commission never let anybody use TRT. They didn’t go a very good job of figuring out how to get these guys off of it. When you get off of it, you don’t just go cold turkey, there are things that you have to do. If they don’t take these estrogen blockers, they can get side effects from it. Chael Sonnen is at this point in his life and his career, where he got married and was trying to have children and he was on medicine to help with fertility and have a baby. This is between Chael and the Commission, but the rules should have been laid out better when they said that’s it, it’s over. Because here is the big problem, too: even when it was legal, the Athletic Commission and all of the doctors were never on the same with page with the [testosterone] ratios and all of these other things. It was always a nightmare, so it had to go away. I’m glad it’s gone and we’re just dealing with all of the aftermath.”

White on who’s at fault – Sonnen or the Nevada Athletic Commission: “Both are at fault. I think the Nevada State Athletic Commission could have laid it out better for how they were going to end this thing. What would be banned and what wouldn’t be banned for the guys coming down off of it. But again, it’s a matter of them not being very educated on TRT. It’s the thing that made this whole thing impossible anyway. And it’s Chael’s fault too, because Chael should have called the Athletic Commission and said, ‘This is what my doctor told me I need to do to come down off of this stuff, so here is what I’m taking.’ He absolutely should have done that. Because Chael had conversations with his doctors and he’s looking at this thing like, ‘I shouldn’t be in a situation where I have to choose between either my job and the sport and my health, my life outside of fighting.’ And he’s right about that.”

White on if the UFC has been doing enough to deal with drugs in the sports: “For us, we’ve been the guys who have taken the drug testing head on. We’ve worked with the athletic commissions to take out-of-competition testing. We are paying big money for some of these guys to be tested. Jon Jones wanted Glover [Teixeira] and him to be tested all the through the lead up to their last fight and we paid for that, too. There’s nobody out there that’s doing more for testing than we are. And this whole thing that was blown out of proportion by the story that ESPN did where they said, ‘These [testosterone] exemptions were rampant throughout mixed martial arts,’ there were only five guys out of 500 that had testosterone exemptions.”

Hear Chael Sonnen’s side of the story and why he plans to appeal.
[ads1]
[ads2]