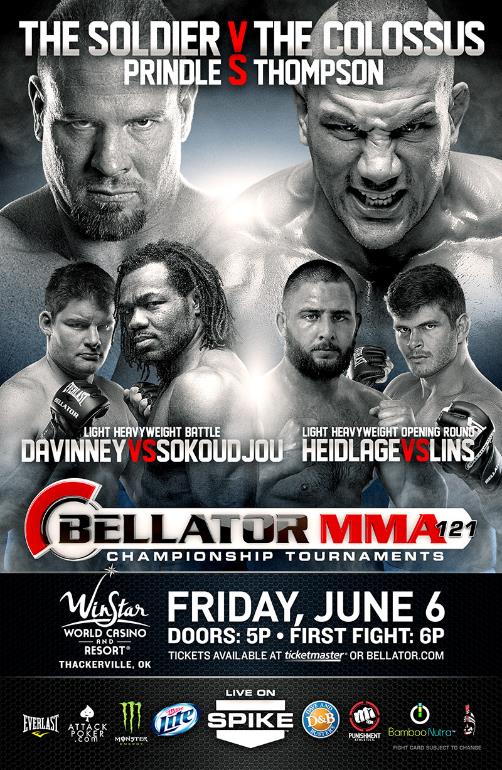 The Bellator Summer Series kicks off with Bellator’s return to WinStar World Casino on Friday, June 6th live on Spike TV.  The event features the last three fights in the opening round of the light heavyweight tournament, the debut of James “Colossus” Thompson and Sokoudjou, as well as a full card of local talent.

The event will broadcast live at 9 p.m. EST/ 8 p.m. CST on Spike TV. The preliminary card will be streamed live and free on Spike.com beginning at 7 p.m. EST/ 6 p.m. CST. Tickets for the event are on sale now and can be purchased at Ticketmaster.com or by visiting the WinStar World Casino Box Office.

“Friday June 6th live on Spike is going to be a blast,” Bellator Chairman & CEO Bjorn Rebney said. “Colossus comes in angry and hungry to prove himself to fans and media on the big stage. I watched him battle in Pride years ago and to have him here now is great, while Sokoudjou finds himself in a similar situation. They both have great names and great heritage in our game and fans love to watch these two scrap. It was a shame to lose a fight like Curran vs. Pitbull, but with these two, our Light Heavyweight Tournament and a great prelim card, this is going to be a great night of fights.”

Combining for 46 professional fights, James “The Colossus” Thompson will make his Bellator debut as he takes “The American Soldier” Eric Prindle in a heavyweight feature fight. Thompson enters the fight riding a winning streak that includes victories over Bob Sapp, Bobby Lashley and Colin Robinson and is looking to take the first step in making his case for a spot in the next Bellator Heavyweight Tournament.

Having made his name in Pride, Thompson believes he can make a run at a title and a victory over Prindle is the first step in that journey. Having been the main event on one of the most watched MMA events in history, “The Colossus” is ready to once again fight on the big stage.

“I’m back!” Thompson exclaimed. “I’ve been training harder than ever to get back to the big show, and I’m finally here. I’m going to smash Prindle on June 6th, make my way into a tournament, and get that belt. No questions asked. Bellator needs some new blood, and trust me, there will be blood.”

Prindle has recorded five wins by KO, but will need to hold of Thompson who enters the cage on a five -fight win streak and is looking to make his mark under the Bellator banner.

With his sights set on making an impact in the light heavyweight division, Rameau Thierry Sokoudjou steps into the Bellator cage for the first time against Terry Davinney.  In a fight of fast finishers, Davinney has won four of his last five victories and will put his skills to the test against Sokoudjou who has nine victories by KO, eight in the first round.

“I’m very excited to be joining the Bellator family,” Sokoudjou said. “They have some of the best fighters in the world fighting in their cage and it’s something I want to be a part of. Bellator always has exciting fights for the fans, and it’s something I’m going to continue for Bellator in every one of my fights.”

At 8-0 Phillipe Lins will battle submission ace Austen Heidlage in the Bellator Light Heavyweight Tournament Opening Round. Looking to maintain his perfect record, Lins will need to get past Heidlage who has won all six of his victories by submission, four via choke.

Coming off of a 48 second KO victory, Egidijus Valavicius will face Carlos Eduardo in the Bellator Light Heavyweight Tournament Opening Round. With 36 professional fights under his belt, Valavicius plans on using his veteran experience against Eduardo, who has only three professional losses.

After defeating Volkan Oezdemir by submission in his Bellator debut in April, Kelly Anundson will face Rodney Wallace in the light heavyweight opening round. Anundson is riding a four-fight win streak, with three first round wins and is looking for the finish against Wallace.

Competing under the bright lights of Bellator for the first time, Bubba McDaniels will battle Matt Jones. A Texas native, McDaniels has won seven of his previous nine fights, with 20 of his 21 victories by way of knockout or submission and plans on putting on an exciting fight for the WinStar fans.

Opening the Spike.com portion of the night will be a fight between Oklahoma’s own Cortez Coleman and Joe Vedepo. A former middleweight tournament contender, Vedepo has recorded 13 wins by KO or submission and is looking for the quick finish against Coleman.

After winning by first round submission in his Bellator debut in March, Stephen Banaszak will face Treston Thomison for the second time.  Thomison holds a 7-2 professional record and is looking for redemption against Banaszak in front of his home state crowd.

Known for his heavy hands, Steve Garcia returns to the Bellator cage to face Cody Walker. With all three of his victories coming by knockout, Garcia will rely on his strong striking against Walker and is looking for another KO on June 6th.

Both making their Bellator debut, submission ace Ray Sloan will battle Jamelle Jones. Looking to maintain his undefeated professional record, Sloan has won five fights by submission and plans on using his ground game to take down Jones.

Guillermo Martinez Ayme and William Florentino will round out the Spike.com card in a welterweight bout. With an undefeated record, Ayme has won five of his six wins by knockout and plans on ending this fight with Florentino the same way.