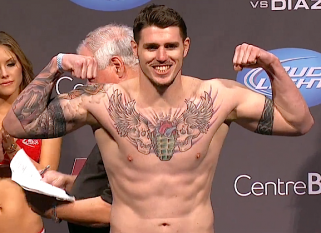 UFC officials have announced another fight for the upcoming UFC 175 PPV event that’s slate for July 5 at Mandalay Bay Events Center inLas Vegas, Nevada. A middleweight scrap between Trevor Smith and Chris Camozzi has been verbally agreed upon by the fighters.

Smith (11-5) is coming off a TKO loss against Thales Leites in his last outing in April. He is currently (1-2) inside the UFC after transitioning over from the Strikeforce promotion.

Camozzi (19-7) is coming off a unanimous decision loss against Lorenz Larkin in his last outing in November 2013. Camozzi has lost back-to-back fights after rattling off four consecutive wins in the UFC since 2012.

Stay tuned to ProMMAnow.com for more UFC 175 news and coverage.