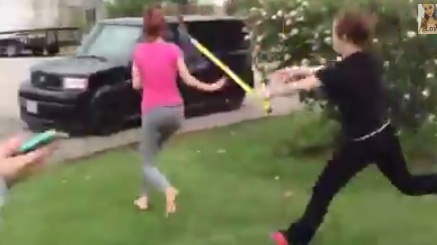 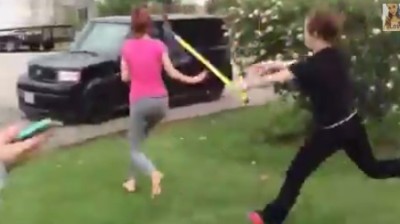 We were one of the first to post the girl fight that ended with a shovel to the face for a mouthy girl. Now TMZ reports the following:

It’s all fun and games until someone gets hit in the head with a shovel … but TMZ has learned police are investigating the infamous “shovel girl” video … and assault charges now loom.

By now you’ve seen the video … two girls are fighting when one grabs a shovel and throws it at the other … nailing her in the back of the head as she hightails it out.

Now a rep for the Miami County Sheriff’s office in Ohio tells TMZ … they’ve assigned a deputy to investigate after they were contacted by the girls’ high school. Maj. Steve Lord tells TMZ … the girl who threw the shovel could be charged with assault or disorderly conduct.

Here is the video:

What do you think? Should the shovel tosser, yeah that’s a new title, be charged with defending herself?