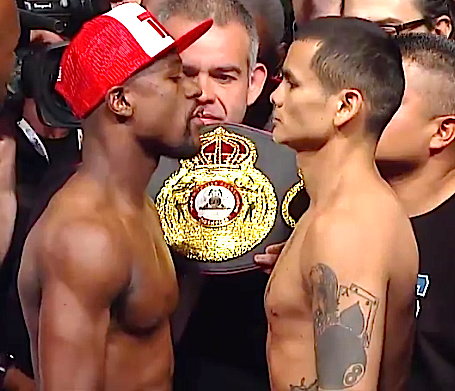 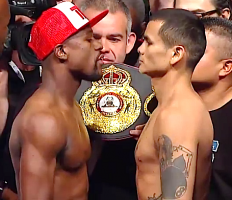 Floyd Mayweather (45-0, 26 KOs) and Marcos Maidana (35-3, 31 KOs) will each put their Welterweight titles on the line this evening as they square off at the MGM Grand Hotel & Casino in Las Vegas. Mayweather’s WBC and Ring titles are up for grabs, while Maidana puts up his WBA belt.

ProMMAnow.com will provide LIVE round-by-round, play-by-play commentary for the Mayweather vs. Maidana main event (starts at approx. 11:30 p.m. ET), as well as quick results for the undercard that features the likes of Adrien Broner and Amir Kahn.

Round 2 – Keep an eye on Maidana’s overhand right. It could be the money maker. Body jab from Floyd. Nice right from Floyd. Right hook. Again. Floyd with a couple left hooks, Maidana backs him against the ropes for a moment but ref separates them. Maidana working the body hard, then lands an overhand right. Left hook from Mayweather, right to the body. Brief clinch. Floyd has found himself against the ropes a few times so far. Nice left jab to the body from Mayweather. Right to the body from Maidana. Maidana with some body shots, backing Floyd to the ropes. Nice right from Floyd before the bell. Closer round but PMN sees the round 10-9 Maidana.

Round 4 – Overhand right from Maidana, left to the body. Brief clinch and warning from ref. Maidana throwing heat. Nice body hook and left upstairs from Floyd. Maidana being busier though. Floyd cut over his right eye. Left hook from Maidana. Looking for big overhand rights that miss. Left hook from Floyd. Lots of clinching. Floyd with a big left hook to the body. He keeps rubbing at his eye. He looks at the blood. Nice right uppercut from Floyd but Maidana fires back with aggressive combos backing Floyd against the ropes. PMN sees the round 10-9 Maidana.

Round 7 – Left hook to body from Maidana. Clinch, Floyd fires back with a combo. In the center of the ring, left hook from Floyd, now one to the body. Maidana backs him to the ropes and unloads to the body and head as Mayweather covers. Floyd tees off with a combo to the head as he gets off the ropes. Double left hooks from Floyd. Maidana backs him to the ropes, repeatedly clinching. Seems to be slowing a bit. Floyd finding his rhythm better now. Lands a nice left hook before the bell. PMN sees it 10-9 for Floyd.

Round 10 – In the center. Big left from Floyd, then a right as Maidana ducks into it. Floyd has his timing now. Maidana callss him forward and backs him to the ropes, clinch, body shots from Maidana. Right from Floyd. Maidana backs him up, but they clinch and ref breaks it. This has happened repeatedly this round. Lead left hook from Maidana. Couple rights from Floyd. Floyd with a jab and a nice right before the bell. PMN sees it 10-9 Mayweather.

Round 12 – Left hook from Floyd. Maidana trying to land a jab. Jab to the body from Floyd. Left right counter from Floyd. Couple body shots from Maidana against the ropes. Ref breaks the clinch, and again. Left to the body, overhand right from Maidana, swinging heat. More combos from Maidana before the break against the ropes. Nice right from Floyd, again. Clinch, break. Right counter from Floyd. Clinch, body work from both guys before the bell. Crowd on their feet. PMN sees the final round 10-9 for Floyd and sees the fight 7 rounds to 6 for Floyd Mayweather… however, round 3 was quite close, as were quite a few.

Floyd looked VERY worried when the result was announced. He said it was a “tough competitive fight”. Justin Bieber right on his nuts. In response to a possible rematch, Floyd said, “If the fans want to see it again, we can do it again.”
[ads1]
[ads2]