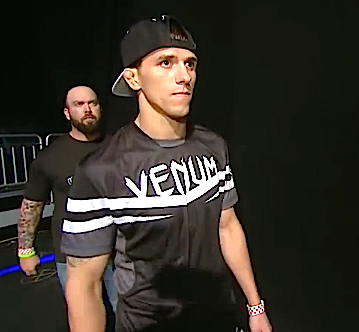 Undefeated Missouri Featherweight Alex “The Spartan” White (10-0 MMA, 1-0 UFC) made his UFC debut last month with a highly impressive first round stoppage of Estevan Payan (14-6 MMA, 0-3 UFC) at UFC on FOX 11 in Orlando. Although White took the bout on short notice, he performed spectacularly, finishing Payan via TKO in just 1:28. The win earned White a nice $50,000 “Performance of the Night” bonus, which is quite rare for someone stepping into the Octagon for the first time. ProMMAnow.com caught up with White this week to get his take on the fight and how it feels to make such a splash in his big show debut.

PRO MMA NOW: Hello, Alex. Thanks for taking the time to speak with us. How has your life changed in the past few weeks? First you got the call to fill in for Mike Brown against Estevan Payan, then to make such a remarkable UFC debut — knocking him out in the first round and taking home that $50,000 bonus. How does it feel, man?

[highlight]ALEX WHITE: Before the fight happened, I found out how much support I had. Like I’ve said before, it was overwhelming — it felt good having that much support. After the fight, people have been coming up to me, asking if I’m Alex, then they’ll shake my hand and say they can’t wait to see me fight again next time. A few days ago, I was at a park and I was signing some autographs. It’s pretty cool (laughs).[/highlight]

PRO MMA NOW: I heard you thought it was an April Fool’s Day joke from your coach Joe Worden, when he told you that you’re UFC-bound. Tell us about that phone call. What was going through your mind and when did you realize it wasn’t a joke?

[highlight]ALEX WHITE: It was pretty early in the morning. I had woken up about 30 minutes before he called. He told me that we need to get ready, that I need to get my weight down. I asked why and he said we got a fight with the UFC. I thought he was just kidding around, trying to prank me (laughs). Even though it was April 2nd, I thought he was trying to pull a fast one on me (laughs). But, sure enough, he had a serious tone in his voice. I was surprised by that — I wasn’t expecting to get a fight in the UFC that soon.[/highlight]

PRO MMA NOW: How much did you know about Estevan? Did you make any adjustments to your training to get ready for him?

[highlight]ALEX WHITE: I didn’t really know much of him. My coach, Joe Worden, just told me that he likes to stand and bang, too. Training-wise, we just worked on my stand-up and my dirty boxing, getting in the clinch if needed, and sharpened my jiu-jitsu.[/highlight]

PRO MMA NOW: We’ve all heard about those first-time-UFC jitters. But to the onlooker, you seemed the picture of calm. Did you have any of those nerves? And if not, how do you explain that?

[highlight]ALEX WHITE: I was pretty nervous. But I like to close my eyes and visualize my opponent and I fighting. That helps me out. I visualize everything that he could do against me and how I could counter that.[/highlight]

PRO MMA NOW: Before the fight, was there anything that you saw in Estevan that gave you the idea you had his number for this one?

[highlight]ALEX WHITE: Truthfully, no. He looked pretty serious. He was ready to fight and so was I. I just had to keep pushing.[/highlight]

PRO MMA NOW: The whole fight lasted 88 seconds. Would you walk us through how it played out from your point of view, what were you seeing in there?

[highlight]ALEX WHITE: I got in there, then he got in the ring. I saw that he’s pretty wide — he has a big body. When the fight started, it took me a little bit to feel him out in the beginning. I started a little slow. But I got warmed up after that and thought now was the time that I should go in for the kill, get him with my stand-up game.[/highlight]

PRO MMA NOW: Did Dane White say anything to you afterwards about your performance?

[highlight]ALEX WHITE: No, I didn’t get to see him afterwards. But, before the fight, earlier in the day, he came down to talk to all the fighters, which was pretty cool.[/highlight]

PRO MMA NOW: What did he say?

[highlight]ALEX WHITE: He congratulated us that we had all made weight, that we had done a good job. He told us the place was sold out and to put on a good show.[/highlight]

PRO MMA NOW: Tell us about your gym, coaches and the guys you work with who helped you make it to 10-0 as a professional MMA fighter.

[highlight]ALEX WHITE: My coach, Joe Worden, has been there since Day 1 and I wouldn’t leave him and my team for nothing. He helps me inside and outside of the gym — and has been since the beginning. My training partners and I are always there for each other, always. It’s a family, you know?[/highlight]

PRO MMA NOW: If Joe Silva called you tomorrow and said they were so impressed by your performance that you could pick your next opponent in the UFC’s featherweight division, who would it be and how soon would you like to get back in there?

[highlight]ALEX WHITE: Truthfully, I don’t know many names of the UFC’s 145-pound fighters. I need to study up on that (laughs). I’d just like a tough opponent. And, as far as I know, if you make it to the UFC, you’re a tough opponent. It really doesn’t matter to me who I fight next. I know that they’re going to be tough and I’m going to have to train my butt off. I like to evolve during the fight, you know? An ideal notice would be at least a month. But if anything happens, I’ll do whatever I can the best I can.[/highlight]

Check out Alex White’s dynamic TKO win over Estevan Payan from UFC on FOX 11 in the GIF below: