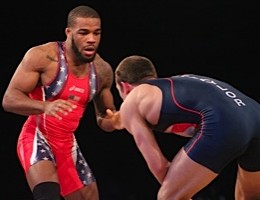 “Just when I thought our chance had passed, you go and save the best for last..”

Vanessa Williams who sang, “Save the Best for Last..” could not have scripted a better lyrical tune for the match which was directed and saved for last Saturday night’s anthem when Penn State’s David Taylor and Olympic champion Jordan Burroughs squared off for the final wrestling match of the evening. The number one wrestler in the world and Olympic Gold medalist Jordan Burroughs who was victorious in London, pulled off one of the greatest comebacks in history for the final championship match at 74 kg (163 pounds) in defeating Nittany Lions Wrestling Club and NCAA Champion David Taylor.

Burroughs trailed David Taylor for most of the match, down by three with 30 seconds remaining before the Olympic Gold medalist campaigned with a hat trick to defeat the magic man for a 7-6 victory. Jordan Burroughs shut down the devil’s magician sound in defeating David Taylor in a epic final classic battle on Saturday night, April 19, in Sin City.

David Taylor believed he had magic in his hands as he cradled Gold medalist Jordan Burroughs in exposing his golden opponent’s shoulders in putting points up on the light board.

But way behind and out the lead, and as he has done so many countless times in his legendary career, Burroughs came from behind to deliver a staged epic drama closing victory. Burroughs fired in on Taylor for two back-to-back double-leg takedowns to win with just 17 seconds left on the clock. Taylor watched in disassociation as the biggest potential upset victory of his career virtually disappeared into thin air.

Burroughs, raised both arms in a victorious gesture to the crowd as the packed house of 2,000 fans stood in approval after the classic battle came to a close.

Burroughs once again dominated and psychologically damaged Taylor with a major defeat for the second straight year in a row at the Open finals at 74 kg/163 lbs. Burroughs won his third Open title where he was immediately named the Most Outstanding Wrestler of the Tournament in the freestyle division.

Check out the Jordan Burroughs vs. David Taylor match in the video below:

Burroughs is now 81-1 in his fourth season on the Open Senior level.

With the win, Burroughs moves forward with a bye to the top of the ladder of the world team final trials which is scheduled for May 31-June 1st at the University of Wisconsin. Meanwhile David Taylor is thrown to the shark infested waters to face Kyle Dake and Andrew Howe, among many tough wrestlers to secure his payback rematch with Burroughs.

The top seven finishers in select Olympic weight classes qualify for the U.S. World Team Trials which will be held and contested on May 31-June 1 in Madison, Wis.

USA Wrestling gold medalist Jake Varner looked in excellent form as he returned to the mat in defeating Wynn Michalak 4-0 in the finals at 97 kg/213 lbs. In international competition Varner previously lost to Michalak, yet Varner prevailed to win his third Open crown at the U.S. Open Freestyle Championships in Las Vegas.

Varner is back on track after a long sabbatical from the wrestling world where the grappler took most of the 2013 season off.

In anticipation of the Championship finals, Varner marched through most of his Friday’s match semifinals and dominated an 11-0 technical fall over Deron Winn. Chad Hanke was defeated 8-1 in the round of 16 and than shut down Micah Burak 5-1 in the quarterfinals.

Varner will be ready to defend his gold medalion at the 2016 Olympic Games in Brazil in the city of Rio de Janeiro. Varner has been requested to participate in Beat the Streets event on May 7th in NYC and will look to represent the U.S.A. Team at the FILA World Championships in September in Uzbekistan.

Rising young star Jimmy Kennedy came from behind to defeat Coleman Scott 7-2 in the finals at 61 kg/134 lbs. Cowboy’s Scott was sitting pretty as the 2012 Olympic bronze medalist but Kennedy now has the edge in pushing the envelope with his great momentum after an outstanding World Cup powerful performance in Los Angeles.

2013 World Team member Keith Gavin overcame an early deficit to defeat Clayton Foster 7-4 in the finals at 86 kg/189 lbs. Gavin stopped the momentum of Foster, who was coming off an excellent showcase at the World Cup. Gavin had previously faced and beaten Foster in the World Team Trials finals last year.

It was Two-time World Team member Brent Metcalf who knocked out a victory with a strong convincing 9-0 win over 2013 U.S. Open champion Kellen Russell in the finals at 65 kg/143 lbs. Metcalf won his first Open title.

Previously Metcalf had defeated Russell in the finals of the 2013 World Team Trials.

2012 Olympian Sam Hazewinkel won his second Open title with an 11-0 win over Andrew Hochstrasser in the finals at 57 kg/125.5 lbs.

Nick Marable elected to drop down a weight class in defeating Moza Fay 5-1 in the finals at 70 kg/154 lbs. Marable, who ended Burroughs’ winning streak at 69 matches earlier this year, won his first Open title.

Let’s go to the FINALS RESULTS of the MEN’S OPEN FREESTYLE:

Article and photos contributed by: