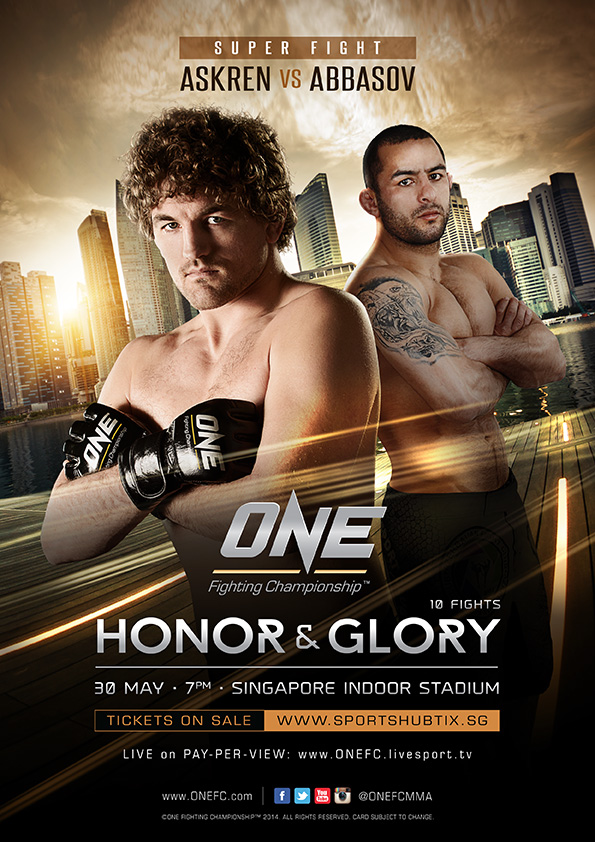 ONE Fighting Championship™ (ONE FC) has added five additional fights to the card for ONE FC: HONOR & GLORY, which is set to take place on 30 May at the Singapore Indoor Stadium.

ONE FC: HONOR & GLORY, which is headlined by welterweight king Ben Askren making his ONE FC debut against Bakhtiyar Abbasov from Azerbaijan, will also feature an exciting bantamweight bout between China’s top mixed martial arts (MMA) star, Ji “The Executioner” Xian and rising prospect, Thanh “Aladdin” Vu. Heavyweights Alain “The Panther” Ngalani and Chi Lewis Parry will also clash in the ONE FC cage. Also, Singaporeans Radeem Rahman and Stephen Langdown will both get the opportunity to achieve consecutive wins in the ONE FC cage when they take on Raymond Tan and Casey Suire respectively.

CEO of ONE Fighting Championship™ Victor Cui stated, “ONE FC returns to the Singapore Indoor Stadium with the most stacked lineup of fights in the history of ONE FC. Fans in Singapore have been eagerly awaiting the return of world-class mixed martial arts action since our last event in October last year. Their wait is finally over and ONE FC fans can finally experience the exhilarating action that takes place in the ONE FC cage once again. The card will be headlined by the ONE FC debut of Ben Askren as he competes in Asia for the first time. Askren is the best welterweight in the world and he gets to prove that when he takes on Bakhtiyar Abbasov. We have also added five bouts featuring crowd-favorites to this historic night as ONE FC returns to Singapore for ONE FC: HONOR & GLORY!”

Tickets for ONE FC: HONOR & GLORY in Singapore are on sale now at Sports Hub Tix (http://www.sportshub.com.sg/onefc). Ticket categories begin with the full Red Carpet and cageside experience for VIPs at S$348 followed by Arena S$148, Terrace S$68 and Balcony S$38. Prices exclude ticketing fee. Pre-sale packages are available from now till 27 April.

Ji “The Executioner” Xian has made a reputation for himself as one of the top mixed martial artists in China. With a background in Sanda, Ji proved that he is the one to watch in the MMA scene when he went undefeated in his first eight fights, capturing the Legend Bantamweight Championship along the way. His signing with ONE FC will provide him the opportunity to test himself against some of the top stars in ONE FC’s stacked Bantamweight division.

Thanh “Aladdin” Vu is a Vietnamese bantamweight who is rated as one of the best prospects in his weight class in Australia. Vu is a decorated grappler who has placed in Grappler’s Realm Australia and Events BJJ tournaments. Vu has proven to be a crowd favorite in ONE FC with his all-action style and will look to return to action with a win over the most high-profile opponent he has ever faced.

Four time muay thai and kickboxing champion, Alain “The Panther” Ngalani, will enter the ONE FC cage again eager to entertain his fans when he faces undefeated Chi Lewis Parry in a heavyweight bout. Ngalani has wowed fans with his explosive striking and he used it to devastating effect, knocking out his opponent with a spinning wheel kick in his ONE FC debut.

Chi Lewis Parry is a heavyweight champion in his home country of the United Kingdom, and has amassed an undefeated record of five wins and no losses.  Parry stands at a towering height of two meters and prior to competing in mixed martial arts, was a professional basketball player in the British Basketball League. He boasts the longest reach in the ONE FC Heavyweight Division and will look to use that advantage to propel him to victory in the ONE FC cage.

Radeem Rahman is the first Singaporean to compete inside the ONE FC cage. He emerged victorious in his ONE FC debut when he defeated Susovan Ghosh from India in ONE FC’s first event in 2011.  He was scheduled to compete in 2012 but had to take time off to deal with an injury. Now fully recovered, Rahman looks to stamp his mark on the ONE FC Bantamweight Division with a resounding win in front of Singaporean fans at the Singapore Indoor Stadium.

Raymond Tan is a founding member of Penang Top Team and is ranked as one of the best bantamweights in Malaysia. He initially began training in taekwondo before he moved into mixed martial arts as he grew older. He is no stranger to competing in hostile territory, as he entered Indonesia and submitted hometown favorite Brianata Rosadhi in just 21 seconds last September.

Stephen Langdown returns to the ONE FC cage after convincingly defeating his opponent in his ONE FC debut. He now gets the chance to become the first Singaporean to record two wins in the ONE FC cage when he faces fellow undefeated prospect Casey Suire of the United States. The bout features a clash of two of the top prospects in ONE FC and both mixed martial artists will be determined to keep their undefeated records intact.

Louisiana-born Casey Suire will also be entering the ONE FC cage for the second time after his win against Raymond Tan in ONE FC: WARRIOR SPIRIT last November. Suire trains with jiu-jitsu black belt Niko Han and undefeated Indonesian star Fransino Tirta in Indonesia, and has finished all his opponents so far. He will look to silence the hometown crowd by finishing Langdown in front of 12,000 fans in Singapore.

Nik Harris is a Malaysian mixed martial artist and trains at MuayFit alongside fellow ONE FC stars Peter Davis, Arnaud Lepont and Chen Yun Ting. Harris is eager to represent his country once again after his impressive win against Indonesian pioneer, Zuli Silawanto, in ONE FC: WARRIOR SPIRIT last November. The young Malaysian is relentless in going for the finish, having never gone to a decision in all his victories. With the support of a nation behind him, he will look to fly the Malaysian flag high by emerging victorious in this battle.

Fighting out of Fight G in Singapore, Brad Robinson is known for his many different talents. He is a professional TV presenter at Cinemax and he made his professional MMA debut in local competition in 2012 against Nik Harris, winning via decision. Robinson wants to prove that the first win over Harris was no fluke and with both fighters vastly improved since that bout, this rematch will likely be vastly different.

Fans in Asia can catch all the action live on STAR Sports. Check your local listings. Also, fans from around the world can witness the action online via live streaming at www.onefc.livesport.tv. The event will be available for purchase at just US$9.99