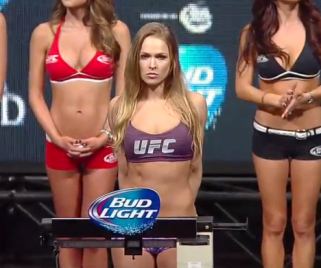 UFC women’s bantamweight champion Ronda Rousey has been relatively quite lately when it comes to rival and Invicta featherweight champion Cris Cyborg. However, that came to an end when speaking with Yahoo’s Kevin Iole in a recent interview in which the subject of fighting Cyborg came up:

“I’ve said before, I don’t care if she’s injecting horse semen into her eyeballs, I’ll fight her, but that’s just my personal decision,” Rousey said. “But I can’t make a decision for the whole division. I can’t say it’s the right thing. This girl has been on steroids for so long and [has been] injecting herself for so long that she’s not even a woman anymore. She’s an ‘it.’ It’s not good for the women’s division. It’s not good at all.

“If she comes in the UFC and I beat the [expletive] out of her and then I retire and become an action movie star, then the UFC is still going to be stuck with her. The division could die. She could ruin the whole sport. Even though it’s a fight a lot of people want to see, even if I beat the living crap out of her, it won’t be good for the sport because then she’d still be in the UFC.”

“I’d be honored to fight a competitor like Gina, who is an example of what real respect and honor is in the cage,” Rousey said. “I really think with Cyborg taking all of those steroids and hormones and then going into the cage, it’s like going in with a weapon. It’s certainly very negligent, but it’s also criminal. I believe, it really is. Promoting her would be promoting that act and I think it would be wrong in every way.

I think it’s fair to point out that drug testing in MMA isn’t the best in the world by any means, but Cyborg has been tested and passed at least one drug test since testing positive for stanozolol in 2011. So the build up between the two best women fighter’s in the world continues. However, will we ever see these two across the cage from one another?