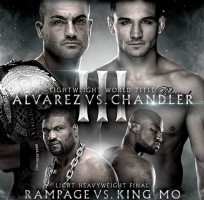 With the Bellator 120 fight card now set, the schedule for fight week has been completed. Bellator 120 will be held on Saturday, May 17thfrom The Landers Center, located just outside of Memphis. The night begins on Spike at 8:00 PM EST, transitioning to pay-per-view with five fights on pay-per-view, including the trilogy fight between Eddie Alvarez and Michael Chandler, along with a Bellator Light Heavyweight Tournament Final fight between Rampage Jackson and King Mo, along with Alexander Shlemenko vs. Tito Ortiz.

On Thursday, May 15th, a press conference will be held in Memphis featuring Alvarez, Chandler, Jackson, Lawal, Shlemenko, Ortiz and Bellator Chairman & CEO Bjorn Rebney. The day will also feature open workouts, featuring the same collection of talent. Location of both events will be made available in the coming weeks.

On Friday, May 16th, weigh-ins will be held at The Landers Center at 5pm EST.

And of course, Saturday, May 17th will feature Bellator 120.

The full fight card for Bellator 120 can be found below: