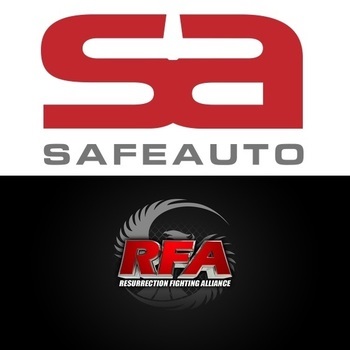 “To say that I am excited to announce this new partnership would be a massive understatement,” Soares said. “As RFA continues to grow as an organization, the opportunity to align ourselves with a respected, forward-thinking company like SafeAuto Insurance is a true blessing.”

“Mixed Martial Arts fans will undoubtedly know the SafeAuto Insurance brand from their prior relationship with the UFC, just as those same fans are learning about the RFA name through the multiple fighters we’ve sent to the promotion such as Sergio Pettis, Brandon Thatch, James Krause, Zach Makovsky, Mike Rhodes, Pedro Munhoz, Dustin Ortiz, Chris Holdsworth, Jessamyn Duke, Tim Elliott and Brian Ortega, so this partnership was a natural fit. I’d also like to thank the team at VFD Marketing for bringing this entire deal together,” added Soares.

The partnership will begin tonight with RFA 14 – Manzanares vs. Maranhão, which will be televised on AXS TV live from the Cheyenne Ice & Events Center in downtown Cheyenne, Wyoming. The main event will feature an RFA flyweight world title fight between Matt Manzanares and Junior Maranhão, which will be the first world title fight to take place in the state of Wyoming since Ken Shamrock battled Dan Severn in the main event of UFC 6 nearly 19 years ago.

“We’re excited to kick off our sponsorship with the RFA,” stated Charlie Kordes, the Customer Demand & Experience Leader of SafeAuto Insurance. “Our involvement with sporting events has been an important part of the SafeAuto brand and we’re happy to continue that part of our history.”

“Having our longtime client SafeAuto Insurance join the RFA signifies SafeAuto’s continued commitment to the sport of MMA, by partnering with the league that is best known for showcasing the UFC stars of tomorrow,” said Elie Deshe, the Co-Founder of VFD Marketing. “The amazing viewership on AXS TV along with the growth trajectory of the RFA make this deal a slam-dunk for SafeAuto’s goals of attracting potential auto insurance customers from around the country.”

“This multi-level deal will allow SafeAuto to support the league itself, MMA stars of tomorrow, and include commercials during RFA broadcasts,” explained John Fosco, the Co-Founder of VFD Marketing. “It is truly a 360 degree marketing deal that will allow SafeAuto to continue its’ longtime support of MMA athletes and fans.”

About RFA:
RFA is a professional Mixed Martial Arts promotion that gives rising stars and top contenders the opportunity to prove their talent to fans and leaders in the industry. RFA presents up to 10 events annually across the United States, including major cities such as Las Vegas, Los Angeles, Denver, and Milwaukee. RFA can be seen live in over 42 million homes nationwide through its television deal with AXS TV. Based in Las Vegas, Nevada, RFA is one of the most active and respected developmental organizations in the fastest growing sport in the world. Visit RFA at www.RFAfighting.com,Facebook.com/RFAfighting, Twitter: @RFAfighting, and Instagram: @RFAfighting.

About SafeAuto Insurance:
Safe Auto Insurance Company is a property and casualty auto insurance carrier based in Columbus, Ohio. Founded in 1993, the company is built on a philosophy of customer service, “The Diamond Principle.” This means they strive to provide caring, professional, knowledgeable, responsible, and dedicated customer service to help make insurance affordable to every driver, no matter what their situation.