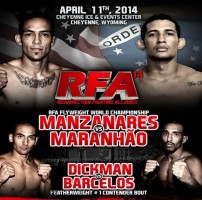 It has been a hot minute since main stream MMA has been in Wyoming but our pals over at Resurrection Fighting Alliance have brought the sport back and tonight in Cheyenne we get a healthy dose of the future superstars of our sport. The RFA 14 main event features the tallest flyweight ever documented when the 6’1” Junior Maranhão takes on Matt Manzanares for the company’s 125 poind title.

The co-main event features a title eliminator  in the featherweight division as Mark Dickman meets Raoni Barcelos. Team Alpha Male’s Tyler Voth will battle Bellator veteran Jei Saudino with the winner getting the first shot at the main event victor.

Stay close as we update your results from Wymoning and as always stay close to ProMMNow (www.prommanow.com) for all of your Resurrection Fighting Alliance news plus exclusive interviews.

Round 1 – Acevedo comes out swinging. Jocelyn gets her down and Acevedo goes for an arm but can’t lock it up. Lots of action on the ground that is taking up most of the round. Jones-Lybarger gets an arm bar attempt but can’t secure it. Maybe a triangle? No, Jones-Lybarger is out and in side control. Jocelyn has Acevedo’s neck and is looking for a guillotine with half a minute left in the round. Acevedo escapes. Jones-Lybarger gets a single leg that puts Rosa down. I score it 10-9 for Jones Lybarger.

Round 3 – Acevedo with a kick and a right hand. Push kick misses but creates some distance. Jones-Lybarger snapes Acevedo’s head back. Acevedo shakes it off and moves forward. Acevedo sneaks a left hand in. Another left lands and Jones-Lybarger is on her heels. A right then a left lands from Jones-Lybarger. Acevedo staying still taking some shots with her hands down. Left hook has Acevedo’s head moving. Big knee to the bread basket by Jones-Lybarger. Acevedo goes for a kick but gets caught and dropped. She’s let back up and more jabs from Jocelyn. Big right but nothing connects from Acevedo. With 90 seconds left Acevedo will have to finish this fight to win it. Uppercut misses from Acevedo. The two trade some shots but round ends. I’ve got it 30-27 for Jocelyn Jones-Lybarger.

Round 1 – Aguiar rushes in. He gets Tyler Toner down and as I sip my Diet Dew he locks in a heel hook and Toner taps.

Round 1 – Touching gloves and Jouban goes for an inside leg kick. They trade some shots and another big leg kick from Jouban. Knee from Montoya. High kick from Montoya. Inside leg kick to Jouban but he dodges out of the way. Jouban lands another kick to the body. Jouban gets rattled with a big right hand. Montoya has Jouban against the cage but we reset back in the middle of the octagon. A kick to the cockles of Montoya stops the action. Jouban lands a hook and avoids a takedown. Montoya has him against the cage but we are back out. Jouban with an inside leg kick once again.  Montoya gets a takedown but Jouban goes right to working for a submission. Elbows rain down from Jouban. A neck crank? Jouban is working from his back. Montoya isn’t going to tap as the round comes to an end. I score it 10-9 Jouban.

Round 2 – Jouban starts the party with a leg kick. Montoya working for a takedown and gets it. Montoya gets the back of Jouban for a second and Jouban up. A single leg puts Jouban back down. Montoya has Jouban’s neck and lands a knee to the ribs. Jouban gets up and maintains 3 points of contact to keep a knee from the dome. He gets one anyway. Jouban back down. So I miss everything else until Jouban knocks out  Montoya! Ps. Alexis Davis vs. Ronda Rousey is booked.

Round 1: Touch of the gloves. Tyler slips but is back up. Kick from Voth lands to the ribs. Voth lands another kick. Saudino lands one of his own. Voth rushes in for some punches and is back out. Clich work going on. Voth defends the takedown. Voth with his back against the cage. Knee to the thigh from Voth after he switches position. Saudino misses a kick but connects on the follow up. Voth pushing the action. Voth gets a takedown. Voth on top but not much action. Closed guard from Saudino. Voth smothering Jei as the ref stands them up. Voth leads in with a kick.  Voth pushes Saudino against the fence. This ref has a weak beard. Saudino gets a knee in. I have it 10-9 Voth after 1.

Round 2 – Low kick from Saudino. Voth bouncing around and rushes in to push Saudino back against the cage. Looking for a single leg but takes a knee in the process. Saudino gets the reversal. Saudino trying to get Voth down but it’s a no go. Head kick from Voth. Trading punches as Saudino comes out on top.  Voth gets Saudino down. Voth is working but gets his arm caught. Voth defends. Big elbow from Voth. Spinning kick from Saudino no go. After 2 I have it tied up 19-19.

Round 3 – Saudino carries the momentum into the last round. Voth gets Saudino down but needs to show some action. Saudino stalling the action . Voth with a guillotine but Saudino escapes. Back to the feet but not much doing.  Saudino tries for a takedown but not getting it. Lots of nothing going on against the cage. Knee from Voth. Voth gets dropped at the end of the round. Close fight… VOth???

Round 1 – Here we go. One contender in the wings, another one to be crowned here. Dickman with a single leg but its not working. Barcelos defending well. Dickman not quitting on it though. We have a stoppage, a kick to the testes. Dickman resting. We go back and Dickman lands a jab. Barcelos has Dickman on his back. Barcelos controlling. Back to the feet as we reset. Barcelos lands an inside kick. Dickman wants a takedown but doesn’t get it. Barcelos with a round kick. Uppercut from Barcelos. Barcelos continues to work. Dickman throws a kick as time expires. I have it 10-9 Barcelos.

Round 2 – Dickman with some pep in his step. He ducks under the right hand of Barcelos and gets a takedown. Dickman with Barcelos’ back. Dickman landing some shots. Dickman locks in a rear naked choke. Barcelos taps.

Round 1 – Holy hell. Maranhao is so much taller. He pushes the pace early and works his jab. Manzares comes over the top with a right and then drops a left in. Big kick from Maranhao but gets caught. Manzanares gets a big body shot in and then a low blow. Back at it with some kicks. Inside leg kick lands for Manzanares. Round kick from Maranhao. Manzanares looks sharp as he hits an uppercut. Manzanares is getting in and out with ease. Manzanares gets a kick to the cockles. He recovers quickly. Overhand right Roy Nelson style from Matt. We go to the ground with Junior on top. I have it 10-9 Manzanares. 4 to go.

Round 2 – Touch gloves and Manzanres goes with a kick. Big shot from Manzanares has Junior backing up. Outside leg kick from Maranhao. Manzanares drops Junior and goes hard but gets his arm caught. Manzanares gets caught in a triangle and gets out. Junior has a leg though and Matt can’t escape. Manzanares goes into the guard of Junior. Arm bar looking tight from Junior but MANZANARES ESCAPES and stands up. Junior slow getting up. Manzanares starts peppering the body of Junior. Junior shoots in but Matt sprawls. Junior on top throwing elbows. Junior is a giant! You can barely see Manzanares. Matt ties Junior up. Maranhao throwing from top position. He lands a right hand. Round closes out. Manzanares up 20-18.

Round 3 – After a break, I pick things up as Manzanares is in the guard of Junior. Elbows from the bottom. These two are knotted up. Matt tries to get up but can’t get out of the legs. He tries to posture up.Ref breaks them up to stand. Manzanares slows the action down but continues to land counter punches. Junior is on top of Matt just smothering him. Manzanares stays busy as the round ends. Close call. Probably go with Junior but he’s still down 29-28.

Round 4 – Championship round starts with Junior missing a round kick. Manzanares goes to the body again. Leg kick by Matt. A combo and kick from Junior but didn’t look like it connected. Both men looking cautious. Manzanares lands once again. Junior with a jab to leg kick that is checked by Matt. Junior follows up with an inside leg kick. Uppercut and hook from Matt but doesn’t look clean. Kick and a miss by Matt. Big jab from Junior that leads to a takedown. Matt defending against the cage but can’t get up. Crowd waking up chanting for Manzanares. Junior can’t get anything going with top position. Stalled out. Junior throws a left hand.  Manzanares on his back and goes for a triangle. What…he’s holding tight. Elbows to add insult to injury. Junior gonna make it though. 39-37 Manzanares.

** Junior collapes off his stool. Dr. in the cage. Pat and Michael not happy with the evaluation.