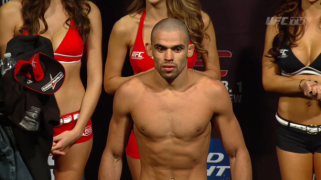 UFC officials have announced that UFC bantamweight champion Renan Barao will look to defend his title against TJ Dillashaw in the UFC 173 main event.

The UFC 173 event will take place on May 24th at the MGM Grand Garden Arena in Las Vegas, Nevada.

Barao (32-1, 1NC) is coming off a first round TKO win over Urijah Faber at UFC 169. It was his second win over Faber, and will look to notch another win over “Team Alpha Male” when he takes on Dillashaw.

Dillashaw (9-2) is coming off a unanimous decision win over Mike Easton in his last outing at UFC Fight Night 35. Dillashaw is (5-1) since losing to John Dodson in the TUF 14 finals. The lone loss came via split decision against Raphael Assuncao. Assuncao would have likely gotten the title shot, but he suffered an injury in his last outing that will keep him out of action for a while.