Baszler out, Nunes vs. Kaufman set for TUF Nations Finale 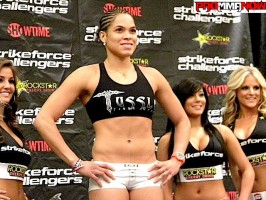 UFC officials have announced a replacement for the injured Shayna Baszler who was set to take on Sarah Kaufman on April 16 at the TUF Nations Finale. Amanda Nunes has agreed to replace Baszler and fight Kaufman. Nunes was set to compete on April 19 against Alexis Dufresne.

The TUF Nations Finale will be headlined by the middleweight grudge match between Michael Bisping and Tim Kennedy. The event will air on FOX Sports 1 with the main card beginning at 7 p.m. ET.

Nunes (9-3) is coming off a TKO win over Germaine de Randamie at the UFC Fight for the Troops 3 event in November 2013. Nunes is (2-0) in the UFC with two stoppage wins after competing in the Invicta FC promotion.

Kaufman (16-2, 1NC) is coming off a no contest in her last bout against Jessica Eye at UFC 168. The bout was originally a split decision loss for Kaufman, but Eye failed a post-fight drug test which resulted in the no contest. Kaufman is the former Strikeforce women’s bantamweight champion.